Gary Robinson of Kayak Fisherman Ireland proves that necessity is the mother of invention, as he forgets his lures and makes do.  Read about his day:

Getting afloat on a Wednesday seems to be becoming a bit of a habit for me. Conditions looked good and the weather was fine so why not? That was all the encouragement I needed!

I tried launching from a different place today and this meant that I had to go against my normal plan of paddling upstream from the launch. The water I wanted to get at was downstream but with the flow as sluggish as it was getting back to the car later 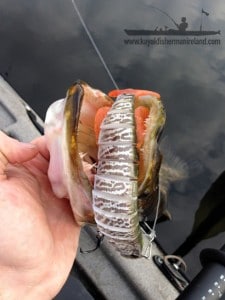 wouldn’t be an issue. I picked my way downstream casting a lure as I went. This session was a bit of a mix up, on arriving at the river I realised that I had forgotten my lures. The only one I had was the one still attached to the rod from the previous session. Luckily enough it happened to slay pike on the last three outings – the Swim Pike by Biwaa.

The first half an hour of exploratory casts yielded nothing. Onwards I pressed in the hopes of finding fish. On reaching deeper water I started trolling, the extra depth allowing me to paddle on without snagging up. Within seconds the rod arched over into a decent fish but, as happens to us all at some time, after a spirited tussle the line went slack. Pike 1 – Gary 0. Undeterred, I pressed on to an area where the river opened up and widened. Here I started to target weedbeds that have started to die back for the winter. Second cast saw a lively pike that hit the lure hard. After a quick photo he was off again.

Having forgotten my lures it was a case of making do with what I had. Today I also had some deadbaits with me which I decided to fish into deeper pockets of the river as I cast the lure to other areas. I picked up a few small pike this way but they all hit the lure. The bait was a slow worker today but towards the end of the session something did pick it up. On the heavier rod I knew that this was a good fish, certainly well into double figures. It stayed deep though and after a minute or so the line inexplicably went slack. I retrieved the bait and everything was intact. My only conclusion is that the pike managed to pick up the bait without hitting a hook. I was devastated!

I finished up the day with a handful of jacks and a couple of fish lost. This is going to sound like a ‘fisherman’s tale’ but one of them was quite a decent fish. I’ll rest her for a couple of weeks before going back to try again. As I paddled back to the car I tried to work out why this particular lure has been doing so well. Small pike make up a high percentage of a large pike’s diet so there is a natural hunger response to a lure that resembles a smaller pike. When the bigger pike are not hungry I like to think that a strike occurs out of territorial aggression. That’s my story and I’m sticking with it! I leave you with a video scene that is familiar to fishermen the world over – the moment that one gets away!