This week Kayak angler and blogger Gary Robinson takes us to Lough Mask where he goes in search of a fine ferox but settles with an escapist pike and some perch on day one. Gary draws us into the story and his descriptions leaves it so tangible that we can almost feel the autumn breeze. 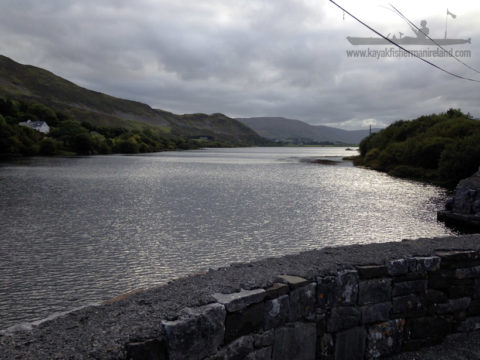 It is rare that you get a very good forecast for the end of the trout season, the last weekend in September. Off to Lough Mask to see if we could tempt any monster brown trout!

The Irish Kayak Angling Club were having their last social meet of the year and with it being relatively local to me I decided to head along on Saturday. The group had planned to fish not far from the historical village of Cong. Following the ‘hellos’ I decided to head to a different area of the lake with one of the other members, Martin. I had form with this bay having fished it a couple of times before, albeit quite a long time ago. We headed off and were soon on the water, the plan was to troll lures and baits in the hopes of tempting a large ferox trout although pike were probably a more likely target. On setting up the kayak I realised that I had left the centre console and echo sounder back home. Back to basics for this session for me!

There is something magical and majestic about the landscapes in the west of Ireland and the area of Mask we decided to fish is staggeringly beautiful. To not catch here would be entirely tolerable given the distracting scenery that surrounds you. As it happens I did catch a very lively pike of about six or seven pounds. I would love to show you a picture but the pike had escaped before I even got a chance to. On playing the fish and drawing it close to the kayak, it launched itself into my lap shaking the lure free as it did. It might have been on my lap for all of two seconds before springing back into the lake. I only mention it because there was a witness to the ridiculous display. 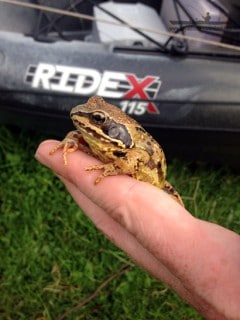 That was my lot for the day, only ten minutes in. Martin and I paddled and covered a lot of water but there were no more rewards for me. Martin managed to catch a couple of perch knocking the pound mark and topped his afternoon off with a nice wee brown trout. Happy enough, we headed back to see how the other IKA lads had fared out. Not great it would seem. As more kayaks landed on the shore so did more stories of lost fish or no fish. There were a couple of small fish that were hit but all in all it appeared that it was a slow day. I haven’t heard how they got on today, I decided to take a change of venue.

Reaching the river this morning I got about getting the gear ready and was surprised to notice that I had narrowly avoided stepping on a large frog. Always nice to see them. Before long I was on the water, paddling upstream. I was trailing lures behind me, one close to the surface and the second a couple of metres down. I paddled for at least a couple of kilometres before hitting my first fish which also happened to be the best of the session. Not making double figures it still gave a good account of itself and took a while to subdue. Once beaten it was an easy job to unhook the fish before quickly releasing it.

I trolled on and around the next bend I had a double hit. I managed the first one into the kayak but the second one shook the hook within arm’s reach. Gary 2 – Pike 1. Both fish were small, a couple of pounds at best. I paddled further upstream just taking in the sights and the sounds of the river, the water fowl, the insects and anything else Nature had to offer me. It was one of those days where it was a privilege to be on the water. I think the things that anglers encounter make them one of the luckiest groups in the country. There was a stiff breeze blowing but it was mild and although Autumnal it should still be another good while before it starts to get really cold. The base layers are safe for another while.

I leisurely paddled further up the meandering water and managed to come into contact with another couple of pike. Both were small but both were welcome. After what certainly did not seem like long enough it was time to turn around and head for the car. One thing I pay particular attention to when fishing rivers is to always head upstream from the launch point. This means that at the end of the session the paddle back to the car is always going to be downstream, you get carried back to your waiting transport. It certainly makes for safer kayak fishing. Below is a short video featuring the few pike I caught. One thing that I did notice with the echo sounder is that the baitfish on the river seem to be shoaling up in anticipation of winter. I have marked a couple of deep holes on the river that I will revisit over the coming weeks and months.

Best lure of the day? Without a doubt the Biwaa Swim Pike. The action from this lure in the water is just ridiculous. It really looks like a small pike. One of the smaller fish had some very fresh bite marks in its side. A lucky escapee and I will be back to find the culprit. I leave you with some video from today.