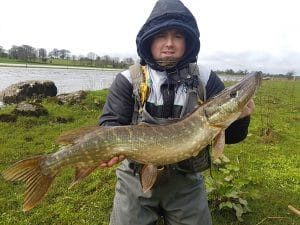 Overall the day was a good as to be expected. The remnants of the floods were still in the fields, the rain was consistently spitting and the wind was blowing hard from the west. A few of the regular lads were M.I.A but a few welcome new faces bolstered the numbers to 14.

It was certainly a day for the wobbling angler as most of the “dead-baiters” had very few fish between them. In total we had 71 fish to the bank with the usual reports of multiple dropped fish.

The fish were not all too big, the largest of the day fell to angler Anthony McCreery with a 10lb 7oz fish caught on a wobbled smelt. There were numerous fish in the 5-6lb bracket and reports that the fish were hard fighting.

The top 3 positions at the end of the day were as follows:

It was a hardy day but all agreed the fishing was aptly good considering the condition of the river.

The Dublin Pike anglers was set up in 1986 and since has become one of the leading clubs in Irish pike fishing. The club caters for anglers of all abilities and backgrounds. In recent years we have had club member reach national finals, win national finals and go on to represent Ireland in international competitions.

Our next competition is scheduled for the 16th of April, new members are still welcome as we have small number of places available. Get membership in early to save disappointment! New members fill in membership request form here.

Dutch anglers enjoy a great week of fishing at Courtmacsherry