12 November:  A cold, wet, windy day with gin clear water and no flow were the conditions that faced the hardy group of 13 that fished the opening match of this years Munster Coarse Anglers winter league at O’Brien’s Bridge on Sunday. The one bright moment was the capture of this magnificent 4lb 6oz hybrid, by last years league winner Richard Bedford,  which won the match on its own while the rest of us were left scratching for an elusive perch or a almost non existent roach. Well done also Paul 2nd and Tommy 3rd who found a small shoal of perch willing to feed for an hour or so…

Thanks to Paul and Dennis who gave up their Saturday to give me a hand at cleaning out the pegs. Also thanks to Johnathan for taking and sending me on the photo.

19 November: The mighty Shannon was in a better humour for our second match in Portumna today. The river was flowing and holding a bit of colour. There was no rain and the sun shone (at times) all though a bit of an breeze from the east kept the fleeces zip up. It was a case of going for the small fish on the inside slowly working away at a weight of sticking it out on the feeder and wait for bits for the bigger fish. 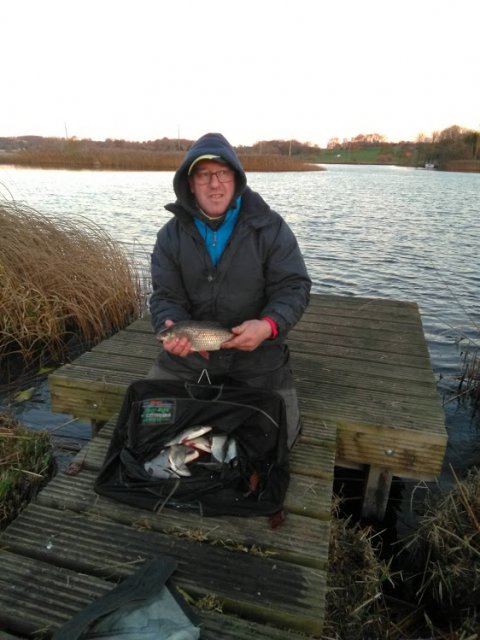 1st. Paul McCaul with an outstanding 14lb 11oz – 180 small roach caught on the inside on the whip
2nd Richard Bedford who sat it out on the feeder for 8lb.9oz
3rd. Kevin Leahy 8lb 2oz (i caught on the whip all day)
4th Bruce Pennell 7lb 14oz with a bit of both feeder and whip
3rd match 2 December venue to be decided (still not to late to join the league as the you can drop 2 results)