Well as usual August was a difficult month for salmon angling and despite relatively good conditions throughout. Water was a little low early in the month but since then it was good enough for fishing. August seemed to be relatively slow throughout the country with the exception of a few rivers. 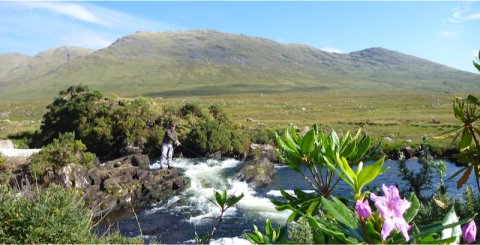 It was quiet then for a few days until the Beattie Party found their stride, having seven in three days. William had five, Gareth one and Oliver Ross, one. Five were off Finlough and two off the river, four on a Willie Gunn, two on a Cascade and one on a Green Highlander. Dione Roberts had a fish of approx. 2.5lbs off Finlough on the 16thon a Tartu. The final two fish of the month were caught on the 21stby Harry Brooke, both on a Willie Gunn, the first from the Bridge Pool of 3lbs8ozs and the second a sea liced fish from the Goat Pool of 5lbs. Fishing pressure has been relatively light since but we are about to get busy again with the usual long standing September anglers arriving throughout the month. Sea trout were disappointing with approx. sixty landed the highlight of which was Declan Fagan who had eight off Glencullin between 1lb and 3lbs. September will give us a true reflection of sea trout numbers as many of our anglers prefer to fish for them.

At Delphi Lodge, with many years of experience with the timing of the best runs of fish, we have in place a price system that offers both great value fishing and lets our anglers know when they have the best chance to catch a fresh run spring salmon or a summer grilse or Delphi sea trout.