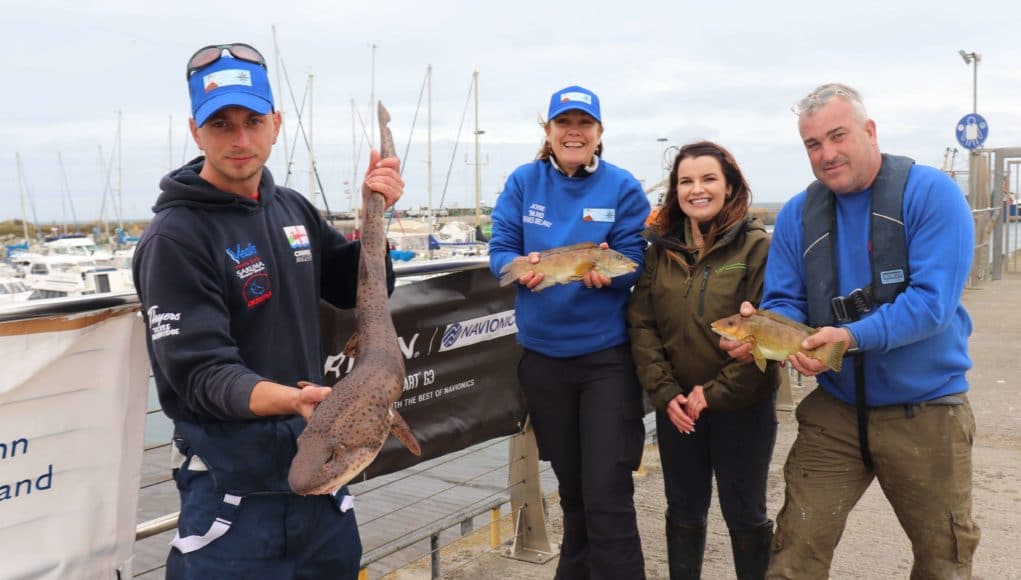 The Welsh boat ‘Seawitch’ has won the 34th Rosslare Small Boats festival for the first time.  The boat landed an astonishing 34 marine species which is a new record in the history of the competition and they beat 105 anglers.  This is the most prestigious sea angling boat competition in Europe and it generated in the region of €300,000 for the local Wexford economy in the off peak tourist season.  This is testatment to the quality of the angling product and the skill and knowledge that these top anglers bring to the competition.

Sponsored by Inland Fisheries Ireland, Garmin, (Navionics), DAIWA and supported by Saltwater Boat magazine the 34th festival attracted anglers from Wales, Isle of Wight, Scotland, Ireland and many other parts of England including Manchester, Liverpool and Portsmouth. Weather conditions were good resulting in calm seas which enabled the anglers to fish without any restrictions for the entire competition.  This resulted in a staggering 42 species being landed which included species rarely seen by the public such as black bream, red mullet, spotted ray and gurnards.  It was a close competition to the very end with a couple of boats neck in neck each day adding to the excitement on the final fishing day.

The winning crew of ‘Seawitch’ consists of Rob Shefford, Garerth Protheroe and Arthur Beechey from Wales with 34 species for 13.67 kilos. The boat ‘Shy Torque’ from Merseyside came second, consisting of Gavin Parker, Daniel Parker and Kevin Martland who caught 33 species for 14.08 kilos.  In third place was ‘Shamrock ‘ consisting of Martin Kennedy,  Pat Condon, Dan Lynch and Joe McPeske from Ireland who 32 species for 15.93 kilos.  Arthur Beechey from the winning boat ‘SeaWitch’ won best specimen of the week with a red mullet of 0.48kg. The heaviest fish was a bull huss of 5.80 kg caught by the boat ‘Safelyduzit’ from Scotland and they received a cash prize and a perpetual trophy sponsored by IFI.

Many successful conservation initiatives for our marine species have been introduced to the competition.  Many fish are now being caught, photographed and released by anglers at sea on IFI measuring mats. Inland Fisheries Ireland officiated at the photographic identification of fish species and a marine fish tank was also used for the purpose of displaying fish species that were caught during the competition. Staff from Inland Fisheries Ireland were on hand to educate the public about the fish species on offer from Kilmore Quay. The educational benefits of the marine tank and practising catch and release for marine species are hugely beneficial in terms of conservation and creating public awareness of Ireland’s marine resource. The public were able to view marine fish such as bull huss, ballan wrasse and red mullet which were kept in the fish tank and released back into their marine habitat alive. This was hugely supported by Kilmore Quay harbour master and staff at Wexford County Council.

The ‘Ken Evason’ Memorial trophy for the biggest cod was won by the boat  ‘Uptide Girl’ who each caught a cod of 2.18kilos. The Conningbeg Trophy for the longest bass of 56cm was won by John Meaning aboard the boat ‘Joe 90’ from the Isle of Wight.

‘The prizegiving night took place at the Coast Hotel in Rosslare Strand where there were fantastic prizes including fishing equipment, cash prizes and engraved trophies. Barry O’Connor, Director, Inland Fisheries Ireland presented the prizes and said: ‘I would like to congratulate all competitors on their success at the 34th Rosslare Small Boats festival. This is the first time I have attended this competition and I am very impressed by the high quality angling that you have experienced in the Wexford area and the wonderful prize table from sponsors’.