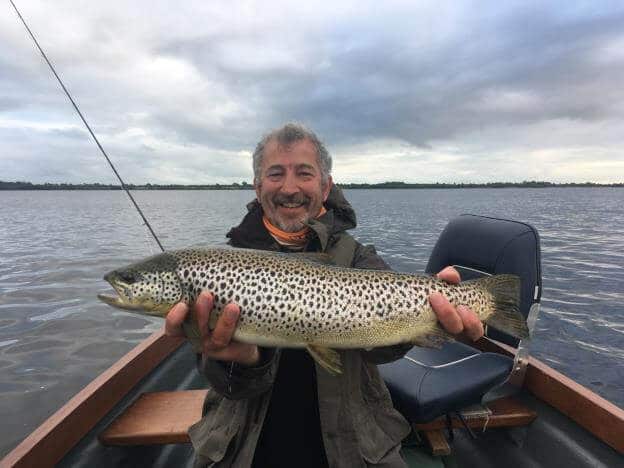 ‘The Darkness Is Light Enough’

This week’s weather of heavy downpours, strong winds and bright skies made for restless fishing waters on Lough Sheelin. Now, on the very brink of autumn those tell-tale signs of this new season are already forcing themselves upon us in the form of dropping temperatures, shortening daylight and early morning cobwebs which sit like a myriad of small tents on shoreline gorse bushes. If it doesn’t sound too much like a contradiction in terms, fishing on this lake over the past seven days has been tough but good.  Heavy showers coloured the water and this coupled with gusty winds and rising water levels meant that surface fly life was poor and movement of fish was patchy but some nice trout were caught nonetheless.  Winds were mainly south to south westerly and with frequent changing directions and varying speeds this added another challenging dimension for the angler out on this lake.  Despite erratic conditions temperatures remained warm and when winds subsided and there was cloud cover some good sedge fishing happened.

Sedge fishing is often referred to as the cream of the crop as far as fly fishing and opportunities are concerned and with an impressive 200 plus species of sedge flies identified in Ireland there are plenty to keep the angler busy.  To avoid getting bogged down with our sedges there are really only 20 that are of major interest to the fly fishermen.  Sheelin has an encouraging number of sedges which is heartening from an ecological point of view.

There were good numbers of Green Peter sedges here in July and early August, these sedges at this time were reported to be larger in size that in previous years with enthusastic takes from the trout. Now, there is a second hatch but much smaller in size.  Sedges are mostly nocturnal, the adult sedges hide in the vegetation during the hours of daylight and are hard to find but at dusk they appear so because of this sedge fishing is better in the evening, at dusk and for the best Peter fishing, through the hours of darkness.  Despite the lack of surface fly activity, anglers were reporting fish coming up at night to the peter artificials which were best fished with a slow figure of eight retrieve.  The quote of the week comes from the title of a book whose author maintained that continual use of eyesight at night resulted in near perfect nocturnal vision which has been confirmed by our after dark Sheelin anglers who report that there is no such thing as total darkness out on the lake and it is this belief  that makes for perfect sedge fishing particularly the nightime sedges of the Murrough and Peter.

A Dublin angler landed three fish using Leggy dark Sedges and Stimulators on Wednesday after 5pm. The Stimulators are a great ‘go to’ fly originally designed by the American Fly dresser Randall Kaufmann. They were tied and fished to represent many different aspects of the trout’s diet from hatching sedges to fry imitations. Another fly which has achieved results is a combination of a Chocolate Drop and a Murrough Sedge. The Chocolate Drop sedge, invented by Dennis Moss, in a size 10 has taken a lot of big brown trout and is great at this time of the year and to the end of the season. ‘It is a must have pattern and good end of season pattern on Lough Sheelin’ (“The Essential Guide to Irish Lough Fishing” by Dennis Moss).

The terrestrials are an important consideration at this time of the year – beetles, grass hoppers, daddies and ants. In late summer and autumn big fish can be tricked by artificial flies that are imitating terrestrial insects. Rain and wind usually have the effect of blowing these land based insects out on to the water and a trout would find it hard pressed to pass up this tempting meal, late morning and evening are best for these imitations.

A huge selection of terrestrial patterns isn’t important but maybe size is – lean to the bigger sizes for high water levels and discolouration to attract attention and smaller ones for clear shallower areas to avoid spooking the fish. We have had a lot of gusty and strong winds this week so stripping a team of Daddies through the water proved to be an effective method for some. A pause in the middle of stripping can trigger a good take from the pursing fish. Angler James Muldoon reported a nice 3 ½ lb trout taken on a dry Daddy on Monday last in Sailors Garden.

This week was all about the sedges, terrestrials and teams of wet flies.

The bibio, with its strong silhouette and water-moving hackle was responsible for a number of catches. A large Dabbler in silver, green or pearly and traditional patterns with the hopper legs attached were the most successful.

The biggest fish for the week was a 6 pounder caught by Andrew Brown, Dublin on August 28th.

Writing about Lough Sheelin’s fishing and collecting information from the anglers I couldn’t help but be reminded of a line from rock band R.E.M’s album ‘The Great Beyond’ – ‘I’m pushing an elephant up the stairs’ because it can be tough going from all sides. Those that are in the know repeatedly tell me that luck plays a huge part in whether you catch or whether you don’t, if a fish happens to be looking up or if your team is in the line of vision then you can strike a piscatorial gold.

Although, with the onset of autumn it feels as if the grim reaper is approaching this is actually one of the best times to fish Lough Sheelin.  This lake has an impressive reputation for carrying trout of substantial weights and in the run up to the close of season it is these fish that will be on the move so the challenge is put up to those anglers to prepare themselves for the finality of the season by trying to work out where these trout are likely to be, to stay in tune with them and to try to suppress that personal ambition of actually catching a weight of a lifetime.  Angler Ronan Creane provided food for thought when he commented in one of his articles that ‘ fishing for really big trout is more about the fish than the fishing, while fishing for average sized or smaller trout is more about the fishing than the fish’.

The official Irish record for the heaviest trout caught in a lake goes back to 1894 when William Mears took a 26lbs 2oz leviathan from Lough Ennell so it is about time that this was beaten and Lough Sheelin with its ample feeding grounds and lumps of trout should be able to do that – no pressure!!

The McIntyre/Guider Cup – This open fly fishing competition will be hosted by the Butlersbridge Angling Club on Saturday September 28th at Kilnahard, 11.0am to 6pm, entry fee €20, all welcome. For further information please contact Dessie McEntee @ 086 8937568.

Weigh in at 6.30pm and meal at Pat Bannon’s Pub, Ballyjamesduff. Entry fee of €25 taken at Kilnahard.