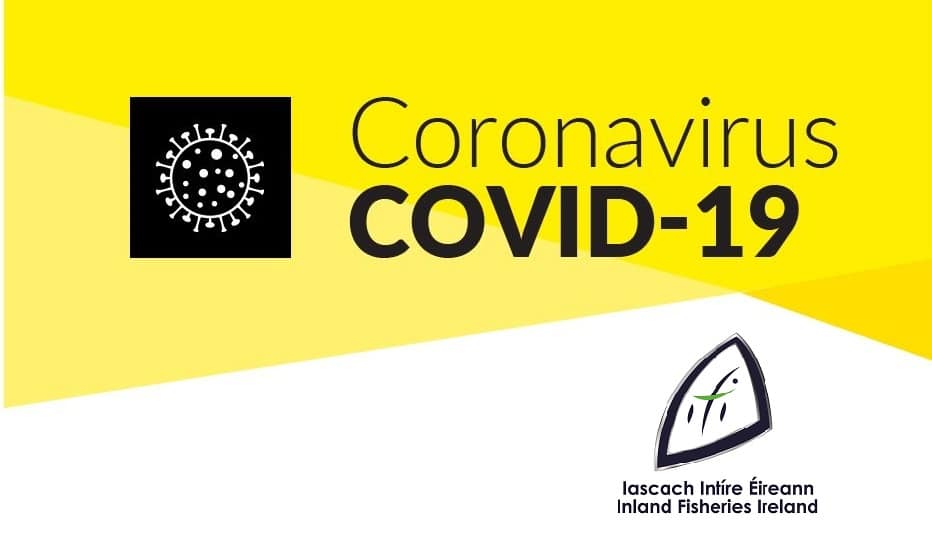 Again not much has changed since last week in angling terms. Sean Canney TD, Minister with responsibility for the Inland Fisheries Sector has commended the action of the vast majority of anglers during the Covid-19 measures and urged all to continue to respect the current measures and #stayathome.

The week also brought some further restrictions on angling with the news that the Killarney Lakes have been closed to fishing, boating and kayaking.

We have produced some angling guidelines signage for clubs to post up on their fisheries to help remind anglers of their responsibilities during this lockdown period if they do decide to go fishing; the posters are available from the following links: PDF, JPG. The posters will be updated to reflect any changes in government guidelines if and when they happen and will be made available on the IFI website.

This week we’re having a look at our fishing this time five years ago with our Irish Angling Update from April 16th 2015:

It has been another week of very cold weather at times but very nice warm weather on other days with some rain also on a few days and it had mixed blessing for all the anglers trying to catch a fish or two.  Nonetheless it has been fairly dry so some watercourses are starting to see better water levels and it has brought more angling activity around the country.

A steady trickle of salmon were reported from most of the fisheries on the River Slaney in the past week but anglers are hoping for some rain to bring in more fresh salmon into the system.  Regular Dutch visitor Rink van der Wal fishing along with angling guide Andrew Ryan caught and released a huge salmon on fly on the River Suir and we have a video of all the action and this magnificent fish wins our Catch of the Week.  We have another video clip from the River Lee where local anglers caught and released a lovely spring salmon on fly.  Great salmon catch and release action footage this week!  A nice spring salmon was taken on fly on the Munster Blackwater at Blackwater Lodge.  Salmon fishing on many of the fisheries in the Cork Kerry area is still rather slow but a few fish were taken on fly on a few of the fisheries.  On Lough Currane sea trout up to 11.5 lb. were recorded along with steady salmon mainly taken on the troll.  Frank Maunsell reports that the River Owenmore had a good run of sea trout in the past week but the river is in flood but fishing should be possible in the coming days as the water level recedes.   In Connemara, salmon are running in to the Kylemore system and there was lovely salmon reported.  It was a tough week for anglers fishing at Delphi but some nice spring fish were recorded over the week. Salmon fishing is improving every week on the River Moy and 17 fish were recorded.  Up on the River Drowes there was better salmon fishing reported with 15 fish taken during the week.  Three salmon were reported taken on the troll on Lough Melvin.

Maurice Neill won the Media fly fishing competition at Annamoe fishery where the journalist had a great day recording 63 fish.  A Canadian visitor John Kennedy was hoping to fish with angling guide Michael Flanagan on Lough Owel for a day last week but cold gales force winds put a stop to that but John enjoyed some good rainbow trout fishing at the nearby Derrymore Springs Fishery.  The humble worm was the winning bait for Michael Meares from Mullingar while fishing the River Brosna where he landed a specimen trout of 5 lb. 12 oz.  Angling guide Mick Flanagan was the winner of the Abbott and Tight Lines Cup in the first trout competition of the year on Lough Derravaragh last weekend.  Elsewhere Navan angler John Mulvaney caught a fine brown trout of 4.3 lb. to win the first competition of the year on Lough Bane near Castlepollard.  Wetflies and floating lines were producing some superb trout fishing on the Waterford reservoirs in Waterford at Knockaderry and Carrigavantry. Up on Lough Sheelin the warmer conditions produced harder fishing for trout but nonetheless some lovely trout were caught. There was some good improvement for anglers flyfishing on Lough Corrib where the first hatches of olives have started to appear.  The same improvement in trout catches was reported from nearby Lough Mask. There was good trout fishing reported on Loughs Conn and Cullin last week with dabblers flies producing good catches of some nice trout from most areas on the loughs.

Kayak angler, Gary Robinson could not fish at sea due to poor conditions and switched to sheltered small loughs to catch a few pike. On Ballyhoe lakes near Drumconrath the Ardee club ran the first Memorial Buddy Martin Cup pike competition and 39 anglers caught over 150 pike up to 12 lb. 12 oz.  A group of Italians used a variety of lures to catch some nice pike on Lough Derravaragh and on the River Suck while fishing with angling guide Michael Flanagan. There was some good pike action on the hot water section at Lanesborough where fish up near 20 lb. were recorded in the past week.  At Melview Lodge, angling guide Kevin Lyons reported a good week for his Dutch and Belgium anglers out pike fishing on several waters near Longford in the past week.  A fine pike of 21 lb. was caught on Ross Lake in Co. Galway on a jerk bait by Aidan Traynor.

Trev Platt had a busy day with his 400 fish amounting to 49 lb. 6 oz. while winning the individual prize in the latest Munster Teams League on the Garden and Graveyard sections of Inniscarra Lake in Cork.  On the River Blackwater at Fermoy, Junior angler Joseph Ensko used a 6 metre pole to catch some good dace in the town section.  There was good catches also on the River Shannon near Portumna where Shane Dunne won a good match with 17 lb. 6 oz. of fish.  On the hot water stretch at Lanesboro, small roach and perch were the only fish turning up in catches along with some good pike in the past week.  Up in Castleblayney we have a full match report of Cathal Hughes big win on Lough Muckno over the Easter weekend as reported in last week’s update. Not far away at Ballyhoe, the first good catches of tench were recorded. Up on the Newry Canal the NCFFI junior team had a practice session and they caught over 1200 fish mainly roach.

Stephen O’Donovan won the west Cork and District shore competition at slobs in Youghal with 12 fish last weekend.  Flounders, codling and dogfish were caught on the day.  Charter skipper Luke Aston had his first deep sea angling trip out with clients from Carrigaholt and Pollack, Coalfish and a couple of codling meant a great start to the season.

There is many competition notices and news clippings in this week’s update and this week Inland Fisheries Ireland confirmed that the two Bass daily bag limit is to stay for this year.

The 2015 Salmon Conservation Fund (SCF), the Midland Fisheries Fund (MFF) are now open for applications.  In total, €240,000 is available to conserve and develop the inland fisheries resource from funds generated through the sale of salmon licences and Midland Fisheries Area permits. The schemes administered by Inland Fisheries Ireland will facilitate clubs, fishery owners, commercial salmon fishers and other organisations to undertake works to improve habitat, stocks, access, invasive species management, and angling, under the supervision and direction of IFI.

As ever please wear a lifejacket when going afloat and don’t forget we cannot accept any angling photographs of anglers afloat not wearing a life jacket.  It is the law and it is sensible to be safe as too many people perish in water annually in Ireland.  It is still cool out there so wear warm layers when out enjoying the best of Irish Angling.