The weather has remained consistently inconsistent this past week with cool, cloudy conditions the new ‘normal’ around the country. Every now and then we had a bit or warm sunshine here and there, normally followed by some heavy showers and maybe some strong winds thrown in for good measure. The outlook is for more of the same, cloudy and cool, so get out if you can – there’s no such thing as bad weather…

The anglers fishing the Feedermasters on Lough Muckno this past Sunday knew all about the wind – it was said to be ‘like fishing in the Atlantic’ at times. For one species, the bream, the wind and rain can be beneficial and a stiff breeze in your face can be a good sign when targeting them in daylight hours.

Ireland’s youth international coarse anglers were given a welcome reprieve this week when it was announced that those who would have been due to move up an age category next year shall be allowed to remain in their current age group to fish the deferred World Championships next year.

Some stunning pike have been landed from the midland loughs this week, the best of them 111 cm long. Deadbaits and lures have both been effective, although one of the biggest of the week (108 cm) came to a perch lure fished over deeper water. A feature of the kind of weather we have had in the last number of weeks is that water temperatures on many of our loughs are a couple of degrees lower than normal and this means that some fish, like these pike, are more active than would usually be expected at this time of the year.

Lure anglers have also had some good success with big brown trout this week; Christopher Defillon of EvasionPeche.net caught a super 11.56 lbs trout on Lough Ree while Ciaran Flannery caught a cracking 7.5 lbs fish while spinning for pike on Lough Erne. Both fish were released to fight another day and Christopher wins our Catch of the Week for his fish and the video that accompanied it!

Mixed results for fly anglers on Lough Sheelin due to the changeable conditions, but anglers over on Lough Corrib fared better with sedges and late mayfly hatches on the trouts’ menu there. In the rivers of the south and east, low water levels meant that only a stealthy approach would work but with this week’s rain the trout should be easier to catch once water levels settle again.

Sticking with the salmonids and we have reports of good fishing for salmon from up and down the country. In Cork, the Bandon saw a good run of fish enter the system with a high proportion of them being multi sea winter fish while some good fsh fell to the shrimp over on the Lee. In the west, the Foxford anglers reported over 85 salmon from their waters on the Moy last week and in Connemara high water levels on Costello and Fermoyle encouraged good numbers of salmon and sea trout to run. Carrowmore lake has also started to produce the goods after a prolonged period of windy weather which made the lake unfishable.

The high winds caused problems for charter boats hoping to venture offshore for some wreck trips but there was still good fishing had closer inshore or in sheltered areas. Aidan O’Hallrahan had this problem fishing out of Courtmacsherry but a super skate from closer in saved the day. Good catches of a variety of species were reported by skippers around the coast. 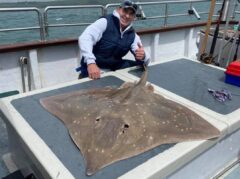 Grilse and good salmon reported from the Bandon

Steady fishing for salmon anglers on the Lee