Another month ends in 2020, and the end of the summer is not far off. The last week has been cooler than normal for the time of year, by almost 2C, and twice as wet in most places with plenty of rain, especially in the last couple of days. Winds have been troublesome too, and getting out to sea has not always been plain sailing. Not a great end to the month, but the rain should at least see a lot of salmon, that have entered so many rivers recently, find safety further up the systems.

On the Moy another week of rain has maintained the high water yet again. Still, there are reports of fish moving through the system which is great to see and hear. Foxford Salmon Anglers reported 36 fish for the week – not bad considering the conditions. West Cork was still producing some fresh fish last week despite low water on some rivers. The Ilen saw about 10 salmon landed by local anglers on Saturday, mostly from the tidal stretch.

On Lough Sheelin anglers are focusing on sedges and fishing the later part of the day. Unfortunately the trout’s focus is elsewhere and while there were some fine fish caught overall it was not an easy week on the lake. Anglers on Lough Arrow report a slightly better picture with more consistent results on the Green Peter. Meanwhile fishing on Corrib was described as reasonable as anglers get some sport on the late mayfly hatch.

In coarse angling, Lough Muckno specialist Brenton Sweeney topped the scales at just under 10kgs in the second qualifier to go forward to the grand final Irish Feeder Masters. There is one last qualifier left, so if you’re interested contact Dick Caplice at https://www.facebook.com/Lough-Muckno-393107817429399/

Summer piking can offer great sport as long as anglers take care to handle these delicate predators carefully to ensure a safe return. Noah Gardner, 9, fished hard for 3 days to finally land a beautiful pike from a Monaghan venue. 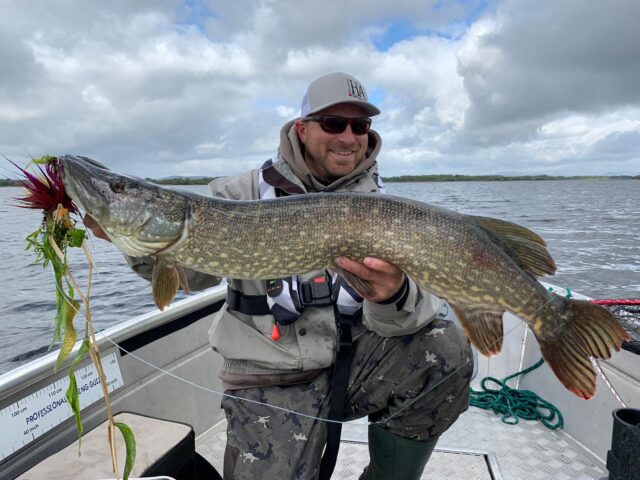 Connacht Predator Anglers held a competition on Lough Corrib at the weekend that saw some fine pike, perch and trout caught and released. Best of all, €1100 was raised for the Galway Hospice.

Catch of the Week goes to Henry Kelly who celebrated his 50th birthday by catching and releasing 16 blue sharks on the Silver Dawn out out of Courtmacsherry on Tuesday. Blue sharks also featured this week for charter boat anglers fishing off the Clare coast.

Shore anglers in Donegal have enjoyed some great fishing recently. Even the less pleasant days had something to offer the Killybegs Mariners as they took the opportunity presented by a day on the water to connect with nature and enjoy just being.

At the other end of the country, West Cork and District Anglers had a tough time in Bantry. Some decent fish were landed, but overall it was difficult in the gusty, weedy conditions.

Inland Fisheries Ireland is reminding anglers to follow safety guidelines on the water and to be aware of potential dangers and risks. According to the latest figures from Water Safety Ireland a total of 105 people drowned in Irish waters last year. Make every effort this Bank Holiday weekend to stay safe. Find out more here Inland Fisheries Ireland issues reminder to anglers on water safety guidelines

Unfortunately it will remain unsettled over the weekend and into early next week. We can look forward to mixed weather with further showers and spells of rain. Below average temperatures at first, but increasing later in the week.

Look and Learn – Find New Fishing Spots From Your Own PC