Apart from last night, there has been very little rainfall during the past seven days. Temperatures were down a little on average and some parts of the country were fairly cloudy. Now, having said that there were some lovely days and the odd evening when you could have stayed out fishing all night if the current guidelines didn’t advise otherwise.

Salmon anglers have been champing at the bit all through the lockdown, but the recent easing of restrictions didn’t do them much good. For those lucky to live close enough to a salmon river or lake water levels have been consistently low for the last few weeks. Last night’s rain will have seen a bit of a flood but it remains to be seen if many fish will be caught as a result.

There’s a bit of trout news to report, mostly from Lough Sheelin once again. I may as well quote directly from Brenda Montgomery’s report from the lake: “A persistently cold north to north easterly wind coupled with night time frosts caused a staggered and somewhat patchy start to Lough Sheelin’s 2020 mayfly season.  Despite the unwelcome chill Ephemera danica still made its presence felt here with a particularly impressive hatch around 3pm last Thursday followed by a heart stopping rise of fish…” She goes on to say that the lake has has some excellent buzzer fishing, and that the Olives are still coming out in good numbers too.

Lough Arrow is also seeing some decent Mayfly fishing on both the dapp and spent. There have been good hatches during the day, but the best of the fishing is coming in the evenings. As long as conditions are suitable, the fishing should continue there for a while yet.

Stories from the Waterside

Do you know of a story with a water theme – a story that simply must be told? Here is your opportunity to tell it and to be in with a chance to win one of 20 great prizes totalling €4,000, which will support local businesses. 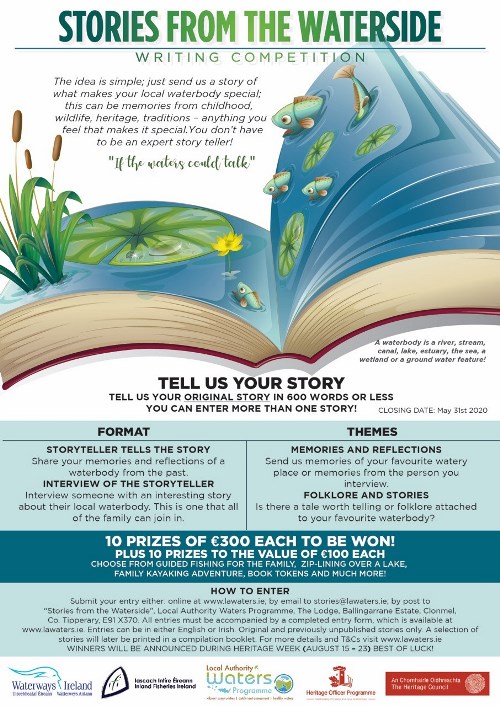 Your story can be from the past or the present day – that’s up to you. It might be about the wildlife that lives or once lived in or around a waterbody – your story might be about fishing, hunting or just watching nature.

As we go to press, there are Yellow wind warnings in all counties – southwestery winds will gust to 110km/ph in places. There’s also an Orange wind warning for all coastal waters, as southwest gales or strong gales will reach storm force at times. Saturday will be a blustery or windy day. It will be mostly cloudy over the northern half of the country with spells of showery rain. Brighter further south with sunshine and showers. Highest temperatures of 12 to 16 degrees with fresh, gusty westerly winds, which will be strong to gale force in the northwest. Sunday will be mainly dry, apart from perhaps one or two showers in the north and northwest. The best of the sunshine will be over the southern half of the country. There will be a bit more cloud further north. Highest temperatures will range from 15 degrees in the west to 20 degrees in the east, with moderate southwest breezes. There’ll be a mix of rain and warm, humid weather next week.

It might be a bit windy for much fishing this weekend, but it’s looking good for those with decent fishing 5km from home next week…

Stay safe wherever you are,

Kerry anglers back on Currane, but not many salmon about