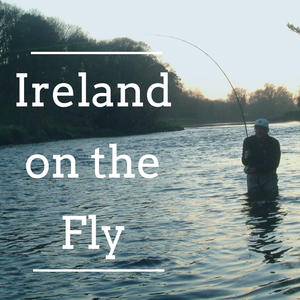 Daire Whelan has started a new Irish fly fishing podcast called Ireland on the Fly, with news and interviews covering salmon, sea trout, brown trout and even bass and pike as well throughout the season.

This is a weekly podcast which started at the beginning of January. You can tune in on Spotify and Apple:

Episode 1 – Opening Day on the Drowes

This first episode of Ireland on the Fly, the weekly podcast for all the latest news, reports and interviews on fly fishing in Ireland, gets an update on the River Drowes from fishery manager, Shane Gallagher. Shane tells us how opening day went, conditions and angler numbers so far, plus he delves into the history and background of the fishery and how his father came to buy it in 1978 with a dream for making salmon angling available to all.

Episode 2 – The Story of the Railway Fishery Part 1

We’re into the last week of January and with still no news of a first salmon of the season caught, for this week’s episode of Ireland on the Fly we’re stepping back to bring you a documentary about the story of Blackwater Lodge. When the old Ballyduff Railway station was closed in 1967, it was to enjoy a remarkable second life as a salmon fishing lodge when Ian Powell bought the building and salmon beats on the Blackwater. This is story of the journey to make a fly fishing dream happen.

Episode 3 -The Story of the Railway Fishery Part 2

It’s part two of the story of the Railway Fishery and how the old Ballyduff train station in county Waterford became the famous Blackwater Lodge salmon fishery.

Famed fly fishing historian and writer, and author of a History of Fly Fishing amongst other titles, Andrew Herd, is this week’s guest on the Ireland on the Fly podcast. Andrew tells me about one of his most recent projects, The Blacker Trilogy, which details the life and flies of the 19th century County Wicklow fly tyer, William Blacker. Blacker moved to England to make his name and fortune as a fly tyer in London and through his books and reputation, came to influence British fly tying for the remainder of the century and beyond. Andrew tells me more about Blacker’s life and legacy, why the influence of Irish fly tyers from the 1800s has been largely forgotten and gives an insight into his own fly fishing writing career.