Fishing in Ireland – Catch the unexpected
Home Sea angling reports Clare Angel Shark caught on a lure in the Shannon Estuary
Share
Facebook
Twitter
Google+
Pinterest
WhatsApp
A report came into us via the ISFC of one of the most unusual angling catches in many years as lucky angler Stephen Gill managed to catch a very rare Angelshark on a lure. These magnificent fish are now very rare in Irish waters and hardly ever turn up in angler’s catches. When they do, they are generally caught using bait of some sort. 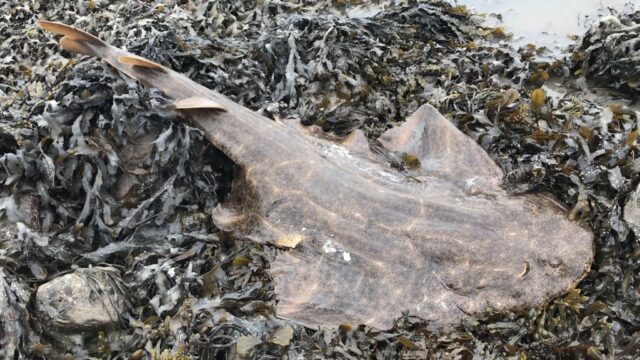 Stephen was out for a day’s fishing patrolling the Shannon Estuary with his lure rod. It was a slow day and after three hours with little action he noticed something unusual in the water while casting out his lure. As he retrieved he watched it and at first thought it was two Thornback Ray in close proximity to each other but as it swam closer he was surprised to see it was a rare Angleshark (Squatina squatina).
He ws even more surprised when the Angelshark saw his lure and made a lunge for it and before he knew what was happening he had a fight on his hands as the fish took the lure. He was only using relatively light tackle and so the fish was more powerful than he was set up for but he managed to get control of it and after a bit of to-ing and fro-ing eased it ashore onto the seaweed. Conscious of the rarity of the fish he quickly released it and watched it swim strongly away.
Angleshark used to be far more common on Irish shores and had a number of strongholds, the most famous of which was in Tralee Bay. They have suffered very badly as a result of commercial fishing and numbers have massively declined in recent years to such an extent that is an extreme rarity to capture one of these fish on rod and line at all. During the 70’s and 80’s it was common to the Marine Sportfish Tagging Programme to have over 50 Angelshark tagged a year. However the last one on our database caught & tagged by rod and line is from back in 2006. When they are caught by rod and line it is always with bait and so to capture one on a lure is unheard of. 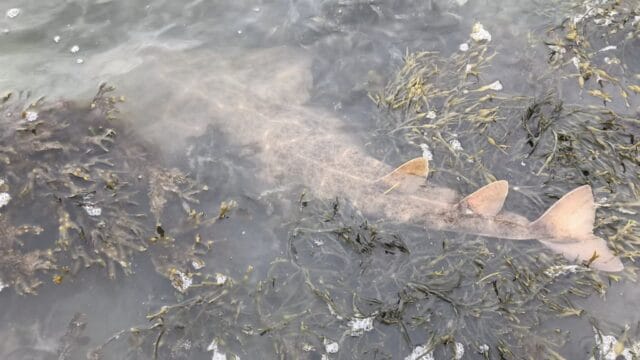