After a couple of good weeks for sun worshippers, the warm spell finally broke this week and not a moment too soon for our freshwater fish. Just when our freshwater oxygen and water levels were becoming too low, while their temperatures were too high, our weather returned to the usual summer fare of cloud, rain, breeze and thermometers struggling to touch 20°C.

The lower temperatures and showers that came this week should improve fishing for many species over the bank holiday weekend. If you do plan to get out on the water, make sure you bring both the wet gear and the sun cream, you’ll definitely need one and may need both!

Thankfully our saltwater species are less affected by spells of prolonged heat and, while many freshwater anglers left their rods and poles in the shed until the end of the hot spell, the saltwater fishers hit the coasts and offshore marks for some really super fishing. Warm weather always brings the sharks in and we’ve seen good fishing for a variety of our usual shark species this week, as well as some exotic visitors, particularly off the west and south coasts.

The Clare Dragoon and Fishing Adventures both got in on the act in Clare, as did the Brazen Hussy II in Galway Bay. Down south, the fleet operating out of County Cork had a cracking week; Irish Deep Sea Charters had great reef fishing, Bantry Bay Charters fished well for mixed species and Baltimore Angling & Wildlife Tours caught and tagged a number of shark species as did Sea Angling Charters out of Union Hall and Courtmacsherry Angling (who also caught some big skate and conger). A number of thresher shark were also sighted around our shores in the last week or two and one or two of those were caught – quite an achievement. In quieter Cork Harbour, Eire Bass got in amongst the bass and pollack.

Mariners sea angling club from Killybegs caught a wide variety of species including chunky ballan wrasse, bass, scad and flatties from the shore and some fine cod, pollack and thornback rays from afloat while, over in Mayo, MV Leah had some good cod and ling. One species that doesn’t mind a bit of hot weather is the grey mullet and, wearing the standard T-shirts, caps and sunglasses, the guys over at Irish Mullet Fishing caught some beauties before the weather broke. In other sea fishing news, EU regulations for recreational bass fishing will remain in place until the end of the year (i.e. 2 fish bag limit, minimum size limit of 42cm).

Back to the freshwater and some of our smaller salmon and sea trout spate rivers, like the beautiful Owenmore in County Kerry, were badly in need of rain and cooler temperatures this week and the few drops we did get probably helped. Some of the bigger systems were slightly less affected by the residual heat, like the Moy and the Munster Blackwater, and they still managed to produce a few salmon and sea trout for determined anglers. No such luck was had on Currane or the Bandon though, where rainfall is also badly needed. Over on the Erriff there was some great fishing just before the heatwave, hopefully things will pick up again now that normal weather has resumed.

Trout anglers have been keeping a low profile lately, so we have no reports from them, nor do we have any reports from the pike angling scene – other than to say that the Lough Ree Lanesborough Angling Hub are proud to announce that they will be able to use their wheelie boat to cater for anglers with disability for this year’s Ree International Pike Classic; the event will take place on September 11th and 12th out of Ballyleague. 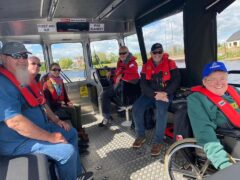 In coarse angling, the Irish Feedermasters Round 4 was held on Lough Muckno just as things began to heat up and a bag of 24kgs was enough for Rory Dunne to take the honours. On the canals, the Belmont Anglers had a club match for 10 of their anglers and some lovely canal tench featured in their catches.

In 2020, Inland Fisheries Ireland protection staff around the country seized over 250 illegal fishing nets measuring some 13 kilometres long; these nets are mainly used in our rivers, estuaries and around our coasts to illegally intercept our salmon, sea trout and bass stocks. As well as these 250 illegal fishing nets, our staff seized 1,287 items including spear guns, hand lines, traps, illegally caught fish and stroke hauls.

As well as carrying out routine patrols, we rely on intelligence from anglers and members of the public to assist us with our fisheries protection work. We have lots of ground (and water) to cover and too few pairs of feet to cover it. To report suspicions of illegal fishing, or sightings of illegal nets, anglers and members of the public are encouraged to promptly call Inland Fisheries Ireland’s confidential 24 hour hotline number on 1890 34 74 24. It’s no good telling us a week later.

Finally, a post-Brexit note for British anglers planning to travel across the Irish Sea in future to fish. It is no longer possible for anglers from Great Britain (and other Third Countries) to bring live baits (maggots, worms etc) in a personal capacity. All future importation must be done in accordance with the DAFM protocols: Import procedures for live invertebrates for fishing bait.

The further outlook is unsettled with rain and showers, breezy also with temperatures staying around average for the time of year.