The Festival took place on the 4th & 5TH September and the headquarters for the weekend was the Haven hotel. With a very short lead-in time due to Covid, the club was happy with the turnout of 14 boats. It was great to see people from all over Ireland and Wales turn up for the weekend and we are grateful for their support. 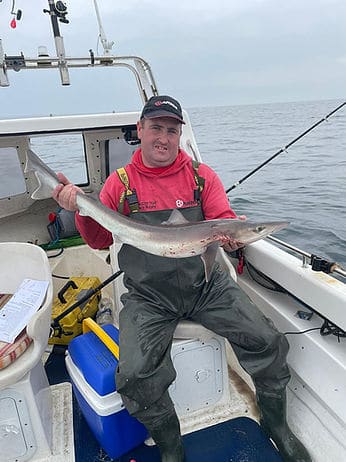 The weather in the run-up to the weekend was very mixed and forecasts changed hourly but in the end, we were lucky with the outer zone fishable on both days, the worst of the weather was mid-afternoon on the Saturday for a few hours when it chopped up a little. Fishing for the weekend was tough at times but in general, the fishing was good with impressive scorecards being returned by all boats.

Boats set off in all directions from the bay in Tramore, out to the reefs and up the estuary in search of the wide range of species on offer. It was clear from day one the crew of Shamrock Tackle boat skippered by Martin Kennedy were going to be hard to beat with an impressive total after day one of 26 species.

It was great to see some of the local boats who are relatively new to these competitions increase the number of species compared to the previous years. On Saturday evening Joint 2nd was Finchaser and TRS with 20 species followed closely in 3rd by Here Fishy Fishy with 18 species and joint 4th Katie and Seawitch with 17 species.

With high numbers after day one, day two was going to be hard to add extra species. With all boats in the water, Sunday morning at 9 am skippers headed in various directions looking to add to their total.

Throughout the day boats hopped from mark to mark to try adding a few extra species to their tally, as 5 pm neared a number of boats were fishing close to the pier to try for that last one species before the end. 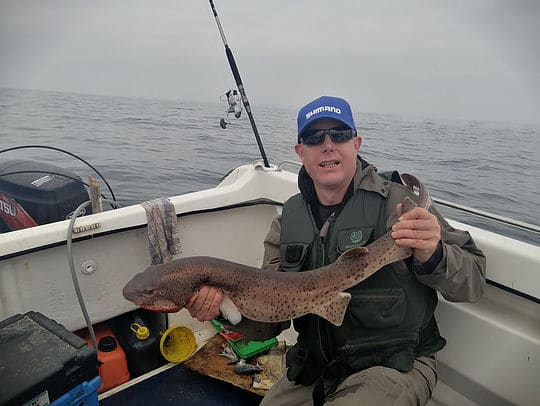 The top boat on the day was Pisces skipped by Pa Hutchinson and adding 8 species to their total. A fantastic performance by the crew of Shamrock Tackle saw them add 6 species to their 26 the day before for a total of 32 species. Superb fishing for a two-day competition and well deserved winners on the weekend.

Adding 7 species to take 2nd place was Team Rinnashark (TRS) with a total of 27 species, 3rd place adding 5 species to make a total of 25 was Finchaser.

Adding 2nd highest daily catch of 7 to finish in 4th was Seawitch, also on 24 and beaten on length in 5th place was Here Fishy Fishy.

On adding up the species caught over the weekend there were 39 species caught by 14 boats, it is great to see the area fishing so well and shows what the area has to offer.

​The nominated species were:

The new category of combined Bull Huss and Smooth Hound was won by Ian Stubbs with a combined length of 193.5cm (BH=101.5cm & SH 92cm)

The committee would again like to thank all the anglers who made this weekend such a great success.  To all the sponsors we would like to acknowledge their contribution, without them this competition would not be possible.

I would ask you have a look at our sponsor page and support the businesses that support us.

We are looking forward to the 2022 Festival which will revert back to May – a date will be announced shortly. 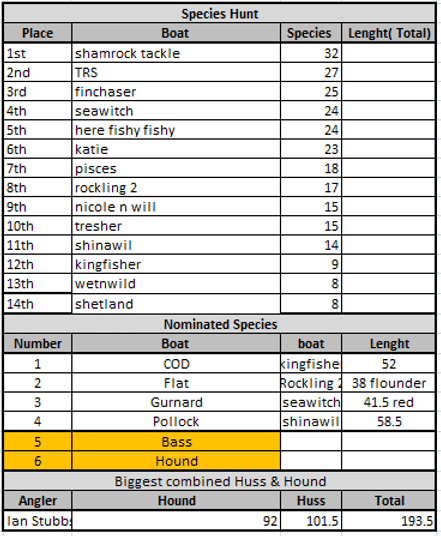 Tuna slow going but still ticking over in Donegal Bay