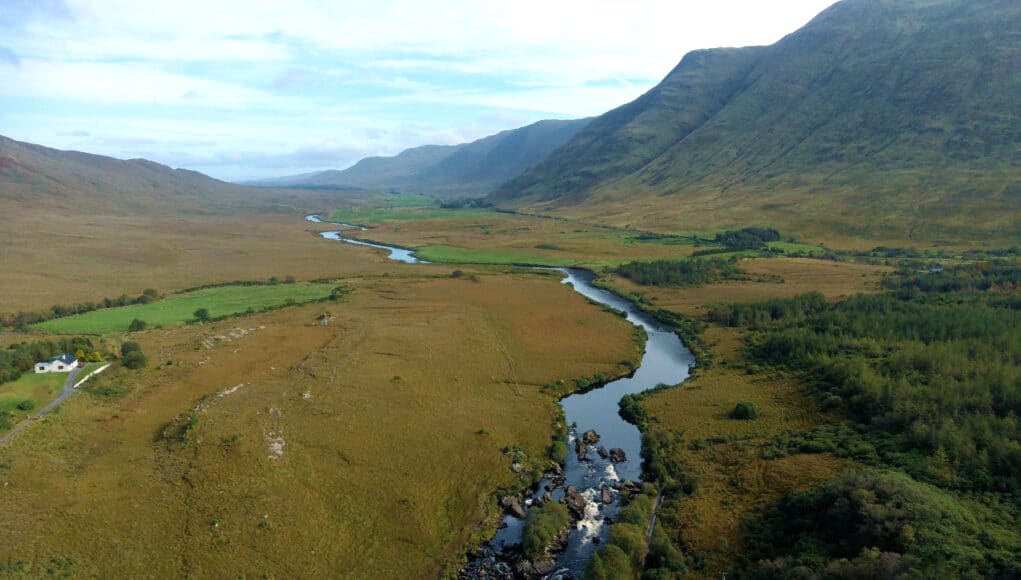 Donavin Brinklow was in touch with a round-up of the season on the Erriff. Overall, the season was mixed, with low water levels prevailing for much of the summer, when the grilse would have been running, and few floods to get them moving.

Early season was tough with not much rain and low river levels. The first flood on the Erriff produced a few fish for the Delphi anglers and on the 5th May Nico Mittmann caught the first salmon of the year in the Bridge Pool on beat 9, weighing 6lbs, and another 7.5lbs fish in the Garden Pool. The next day proved to be good too; Urs Leibundgut landed a 9.5 lbs salmon in the Bridge Pool using a Silver Stoat. Between then and mid-June there were 13 salmon landed, as low water held sway.

June continued on a dry weather pattern, with tough fishing conditions, but anglers were meeting fish regularly as grilse ran upstream in low water. Among the anglers to land fish during this period were Patrick Molloy with 2 fish to 7lbs, John Ryan had an 8-pounder, Levi Caffrey had 2 fish to 7lbs, Neill Boyle took a 12lbs fish off the Falls Pool, and George Dawson had 2 fish to 5.5lbs on Beat 5.

Early July was reasonably good, with 9 salmon landed on the 7th, and many other days with 6-7 fish reported. Kevin Mitchell was one of the lucky anglers, with a 7lbs salmon and 3 sea trout. Others of note were Peter Kavanagh, with 2 grilse on Beat 9, Mark Helmore had 5 fish to 5.5lbs, Conor O’Leary had 2 fish on Beat 6 and Peter Coyne had 3 fish from Beats 8 and 6. In spite of the weather, July still saw 104 salmon in the book.

Late July saw a heatwave, with air temperatures in the high twenties, and water temperatures reaching 27C. Fishing was halted until the weather changed and fish could be targeted again without putting undue stress on them. Once rain arrived in early August fishing really improved, with a lot of fish caught. The 6th saw 12 fish landed, 17 on the 7th and 37 fish on the 8th! Johnny Betts had a red letter day, landing 8 fish off Beats 3 and 4, including a fine 15lbs salmon on a Cascade.

Alexander Mills caught 5 fish on Beat  5, Jimmy Keogh had 4 fish off Beat 7, Jake Delaney had 3 fish off Beat 9, while many other anglers including James O’Neill, Mark Helmore, Conor O’Leary and Martin Wiltort had 2 fish each. Definitely the day to be there! August was the best month of the season, with anglers putting 141 salmon in the catch book.

Eabha Jones with her first ever salmon

Late season again saw mostly dry conditions with the odd flood, but the Erriff tends to fish well in September, and this year was no exception with 84 fish recorded. Among the anglers to meet fish were Ian Ferris, who had 2 salmon in Altamont’s Dam, and D. Edwards, who had 3 salmon on Beat 7. Rain at the end of the season meant that there was no angling on the final day, with exceptionally high water levels making the river unfishable. If only we’d had some of that rain during the season!

The season total was 372 salmon, including 269 wild fish which were all released and 103 ranched fish. The best fish was Johnny Betts’s 15lbs salmon on the 8th August, with James O’Neill also landing a 14lbs fish on the 11th. John Phelan had a 12.5lbs fish, while Jimmy Keogh, Paddy Donegan and Neil Boyle all landed 12lbs fish. Top flies this year were the Cascade, Willie Gunn, Posh Tosh, Stoats Tail and Collie Dog.

Thanks to Donavin for his updates throughout the season and for looking after the visiting anglers.