Pierre Bronsgeest reports on a successful King’s Classic 2021 from earlier in the month:

The King’s Classic was a success in every way. After two years of preparation, trade fairs, open days and other promotions, it became reality. With all precautions due to Covid-19 and strict regulations in Ireland, everything went smoothly in the end.

A big plus was the journey via ferry from Cherbourg directly to Dublin. The journey involved excellent roads to Cherbourg (approximately 7 hours drive), where the ferry to Ireland leaves at 4.30pm. You drink and eat on board, get a good night’s sleep and the next morning after breakfast you drive into Dublin at 10:45 AM. So easy! A comfortable journey and then, in Ireland, the weather was glorious. Unusually warm by Irish standards. And the weather remained beautiful, without a drop of rain. Not so good for fishing, but luckily we got some more clouds and a little wind during competition week. 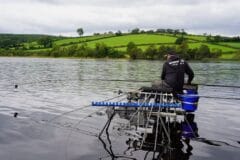 Prior to this, the memorial ‘Lol’ Higgins was fished on the same sectors as the King’s Classic. Lawrence ‘Lol’ Higgins was an English match angler who has fished the KOC matches from the start. He was a welcome fisherman, with a lot of humor and a lot of knowledge of fishing. After his death, Pascal van de Venne and Pierre Bronsgeest came up with the idea to fish a memorial. This was immediately welcomed by the participants and by Henk van der Kooi of BBI-travel.

The widow of ‘Lol’, Christine Higgins was also present, as was her son Andrew Higgins with his family. Emotional, but beautiful.

Then the memorial match. On Sunday 29 August, 35 participants fished in four sectors. Fish were caught everywhere, but the Rocks sector scored the best. There Simon Willsmore managed to catch 17,500 grams and thus write the memorial to his name. He received the cup from Christine Higgins. In addition, the sector price is € 100, a fishing platform from Pascal van de Venne and a bottle of Jameson. 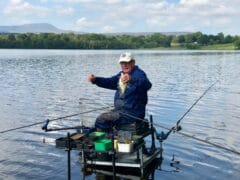 Monday, August 29, 2021, a memorable day. Finally, after two years of hard work, there was the draw in the Commercial Hotel, with face masks, keep your distance, but grab your number and fish. The mood, the atmosphere was immediately in it. Under sunny conditions on to sectors A = Deeps, B = Connelly’s, C = The Rocks and D = Brackley/Prospect.

Four beautiful sectors that got off to a slow start. The disappearance of the wind, the high temperatures 23-24 degrees were the reasons for this slow start. That was not the case for the newly added sector The Rocks, part of lough Scur.

There it was a battle with the pole, at least if you can still call using two sections the pole! That was the rod length with which Darius Karaliunas managed to catch over 400 fish! Rien Verhoeckx fished with four pieces and also did well. On the other side of the sector there was a battle between Michel Diepstraten and Deimante Karaliunas, also with the pole! The Rocks was won with 23,900 grams by Darius Karaliunas who also became the day winner. Second Rien Verhoeckx 18,150 grams, Third Deimante Karaliunas 16,350 grams and Michel Diepstraten with 14,400 grams. 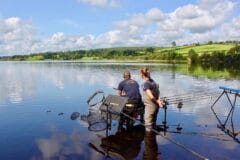 As said, a difficult start. Particularly on sector A = Deeps, which does not mean less exciting. Pascal van der Venne won here with 4,300 grams. Sector B = Connolly’s had a reasonable start, Andre Multem won there with 14,250 grams. On sector D = Brackley Prospect it was Leo Koot, Simon Willsmore and Willemd van der Helm. Here they only fished with the feeder and Willem van der Helm managed to take advantage of that with the victory, he became first with 11,800 grams. Second, Leo Koot with 11,040 grams and third, Simon Willsmore.

The second day immediately started with a fratricidal battle, again on The Rocks. Willem Multem at number 9 and on the other side Andre Multem at number 2. At number 6 was Charlie Richards, the 16 year old Irish talent from Ballinamore. However, he could not prevent Willem and Andre from taking a lead, especially Willem Multem. Andre didn’t have it too good in the beginning catching roach that were too small and too few in between. That was good for Willem. With over 300 fish he managed to catch 23,500 grams. Charlie Richards did not get further than a third place with 11,250 grams. The decisive weight came from swim number 2. Andre Multem caught 27,300 grams. He won the sector and also the daily prize. 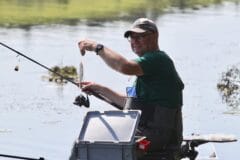 The other sectors performed better than the previous day. In sector A = Deeps Willem van der Helm won with 8,100 grams and Leo Koot was second with 6,020 grams.

Sector B = Connolly’s was producing on all pegs. Ron Stoorvogel won here with 15,500 grams. Martijn Kroes was second here with 14,750 grams.

In the sector D = Brackley/Prospect, Michel Diepstraten took the win with 14,640 grams. Second was Brian Declerck with 11.620 grams.

As mentioned, 16-year-old talent Charlie Richards is one to keep an eye on. He fished for the sector Brackley Prospect on day 3 and immediately took control of the sector. He fished more than 40 yards with the feeder and left no doubt as to who would take the industry profits. Charlie won with 20,100 grams. Second was Piet van Lieshout with 14,100 grams. Meritorious third Sammy Driesen with 12,800 grams.

The other sectors scored slightly less on average on this third day. Sector A = Deeps in particular had a hard time. Michiel Diepstraten managed to take the sector gain with 6,600 grams and scored another point, which gave him the prospect of a good position. Second was Darius Karaliunas with 5,100 grams.

Connolly’s was dominated by Willem van der Helm who managed to catch some nice bream and hybrids with the feeder. He caught 21,500 grams, enough for the sector profit and the daily profit. This marked the third sector win in a row for Van der Helm. Only 3 points. Leo Koot right next to him was second with 18,500 grams. Niels der Kinderen was third here with 17,250 grams. The The Rocks sector had a decent day with fishing across the trade. The final battle was between Dick Ekkelenkamp and Tom Sexton. The sympathetic Englishman was fiddling with three different rod distances. Dick was immediately with four sections at the right distance and at a good pace. He still had to lose to the Englishman who managed to find his rhythm and became first with 17,200 grams. Dick had to make do with 200 grams less at 17,000 grams. 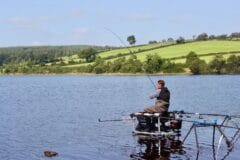 Willem van der Helm is in good shape! After all, he already has three points and with the knowledge that the worst result of the four days is dropped, he must again score a first place. If not, he must hope that his overall weight is sufficient to win.

His competitors, Andre Multem, are in sector A Deeps, Michel Diepstraten in sector B Connelly’s and a dangerous outsider, friend and travel companion Leo Koot in the same sector where he fishes himself, Sector C The Rocks.

Michel Diepstraten draws number 10 on Connelly’s, the winning number of the previous day! He gets off to a good start and immediately catches nice fish, hybrid and roach. Andre Multem at number 6 on Deeps is less happy. It doesn’t go the way he planned, catches fish, misses etc. Not a nice rhythm. That is certainly possible with Martijn Snijders and with Willem Multem! Fratricide? Back to The Rocks where Leo Koot has a kickstart and catches small hybrid and roach one after the other with the pole at a good pace. Willem van der Helm, fishing for number 1, the ideal number for the fixed pole! So cat in the cup. That would be different.

Quickly to Connelly’s, there Michel Diepstraten manages to catch fish until the final signal and his sector wins with 14,250 grams. Second is Sandy Denduyver with 12,000 grams.

On to sector A Deeps. How is Andre Multem? He did catch some fish, but not enough. It has become a battle between Willem Multem and Martijn Snijders. Snijders wins with 7,550 grams, Willem second with 7,500 grams. Andre gets eight points and that makes the podium inaccessible. Then to the decision on The Rocks! Leo Koot never stopped for a moment. Like a well-oiled machine, he is fishing for profit in the sector with 25,500 grams, also good for the day’s victory. Willem van der Helm is second with 18,600 grams and Simon Willsmore third with 16,800 grams.

Willem van der Helm has three points and 41,400 grams! Enough for the final victory! Michel Diepstraten also has 3 points but less weight. He is second with 3 points and 35,490 grams. Leo Koot jumps to the podium and is third with 5 points and 55,040 grams.

The results were announced at Fred Walsh’s Commercial hotel in Ballinamore. After the sector prizes and the day winner who respectively receive money and a voucher from GURU worth € 100, it is time for the final prizes.

First, organizer Pierre Bronsgeest and Henk van der Kooi would like to thank the sponsors and the people who are indispensable for the realization of this King’s Classic.

Main sponsor Shimano has been more than just sponsoring this King’s Classic. By thinking along at an early stage, before and during the match, it also went well. Thanks to Shimano and in particular to Kris Sloof who was present throughout the week.

In addition to GURU, Sjors Milder, for the support with vouchers. Louis Berendsen Berlok feeds for the 20 buckets of groundbait, filled with ten kilos of superfood!

In particular, we would like to thank Teresa Kennedy of Glenview for all her work with the organization and her sponsorship on the prize table. We also thank Francis McGoldrick for the fish technical support.

Important for the organization is the collaboration with Leitrim County Council. During the awards ceremony, Paddy O’Rourke, Chairman of Leitrim County Council was on hand to support us and thank the anglers for coming to Ballinamore and Leitrim in particular. He also said that the Council will provide support for the King’s Classic in the coming years.

Then the prizes were awarded with a new component, the Blind Couple. Two anglers are matched by drawing lots and then their total weights are added together. The top three couples will win great prizes. Money and vouchers from Guru.

Below are the winners and what they won. The total prize pool is worth €13,500

Peter received a unique Shimano/ King’s Classic polo. In addition, he is a guest at Shimano experience center for a day, where fishing is done on the pond!