Madeleine Kelly reports on an event to take place as part of the 2nd International Women’s Flyfishing Day to be held on 11th September 2021. Last year over 500 women from 14 countries took part and it is hoped that this year will reach even further… 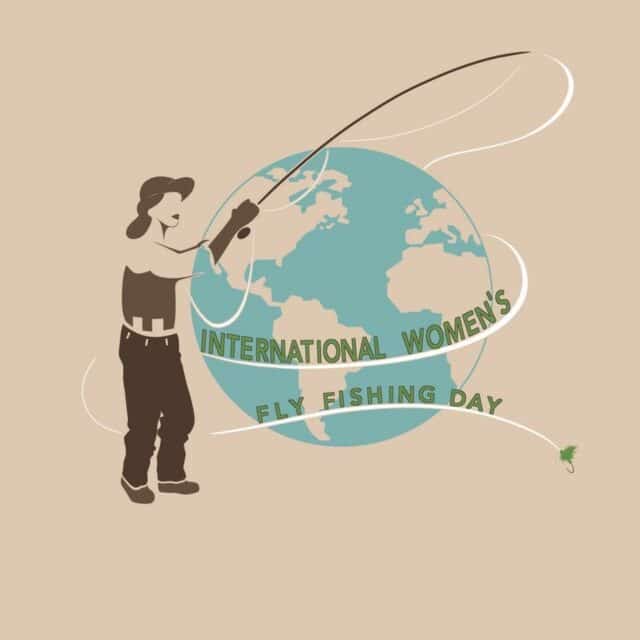 The second ever International Women’s Fly Fishing Day (IWFFD) will take place on Saturday 11th September 2021. It’s planned that at 11am, in every time-zone across the world, that female fly anglers will post photos of themselves to FaceBook or to Instagram, either taking part in a flyfishing outing that’s happening on that day or undertaking something fly fishing related, that will show their enjoyment of flyfishing.

This is an initiative from two women in two very different parts of the world – Maddy Kelly from County Down in Northern Ireland and Pamela Caldwell Dunlap from Hurricane in West Virginia, USA. They met on a women’s Flyfishing site – Women Wine & Waders – (https://en-gb.facebook.com/groups/1496931843942254/) that was set up by Pamela and they’ve been sharing fishing tales and life stories for the four years since.

The Mission Statement of International Women’s Flyfishing Day is “To bring women together from all over the world, virtually, for one day in mid-September to celebrate their fly-fishing life and to encourage them to be role models who will support new women who take up fly fishing.”

Unfortunately the effect of Coronavirus is still being felt around the world and although some women will be flyfishing, some plans will have been curtailed because of adherence to local Government guidelines which differ from country to country. There’s always the chance as well that weather may interfere with fishing plans and as International Women’s Fly Fishing Day is a world-wide event there will be some women in the part of the world that is currently out of the fly fishing season. To allow for those circumstances the photo or video posted can be of anything related to fly fishing e.g. practicing casting, tying a fly, or even reading a book on the topic or watching a fly fishing video etc. Or for women unable to be doing anything related to flyfishing at 11am on 11th September 2021 they can post a photo or video that shows that they do indeed enjoy fly fishing.

Julie Cook from the Southland Fly Fishing Club in Invercargill New Zealand is, at the minute, the most easterly woman planning to take part which means she’ll get the first opportunity to post her 11am photo, and Catrina (Cat) White from Los Angeles is the most westerly. She will close the day of celebrations.

With photos being posted at 11am from all over the world the day will unfold from New Zealand to the west coast of the USA over a 20 hour period.

Fly fishing, and angling in general, gives so much to the angler. Mindfulness is very popular now-a-days but anglers have known the mindful effects of angling for a long time. And it’s not just peace of mind, there’s also the fitness aspect. Wading into waist-deep water will work your core as will scrambling five miles up a riverbank and back down the five miles to your car with your rod and essentials for the day – that competes with any gym workout. And to complete the scene there’s nothing like lunch alongside a water’s edge with a nice cup of tea.

A lot of anglers, as well as fishing, start to care for their rivers and waterways. They organize work parties to clean up litter, fix river banks, create and improve access, build bridges and stiles, remove fallen trees, and clear water blockages that prevent the movement of migratory fish – all very physical work.

Then there’s the workout for the brain. Anglers will say that they switch off while fishing and are in another world and that worries and problems just slip away. But the day is spent watching, really seeing what’s there and analyzing everything – the bug life, the water movements, the feeding patterns, watching for clues that might be as simple as feeding birds.

Angling is a work-out in nature. And women are catching on to the secret and they’re passing on the information to other women. More and more are becoming qualified as coaches and instructors or are attending women’s fishing days as volunteer-helpers.

Maddy Kelly has been flyfishing for over 30 years and has fished throughout Ireland. Since 1993 she has been a regular member of the Irish Ladies Fly Fishing team which takes part in the Ladies International Flyfishing Championships fished against teams from Scotland, Wales and England. She has recently gained coaching qualifications and has been organising events to introduce women and young people to flyfishing.

Pamela Caldwell Dunlap is a more recent convert to flyfishing. Prior to discovering the joys of flyfishing she was not keen on the outdoors at all. She was introduced to it on a first date 6 years ago and enjoyed it so much that since then she has organised camps for women to learn and has been responsible for a number of women becoming anglers.

The internet friends, Pamela and Maddy, have spent four years sharing stories of the days that they organise for women to enjoy flyfishing. Though separated by 3,590 miles, most of it ocean, it turns out they’ve a lot in common. They are both committed to encouraging and supporting new women into flyfishing.

Posts to celebrate International Women’s Fly Fishing Day may be made to the following Facebook group. And as it may not be possible to post at 11am they can be made all day.