In general the last week has been pretty typical for summer in Ireland. Temperatures were more or less average for the time of year, with some parts getting plenty of sunshine and others getting some rain. Early this week, however, the rain gave way to warmer sunnier conditions manly in the southern half of the country, while over here in the west and in parts of the south west these wet conditions resulted in many salmon rivers seeing excellent runs of grilse.

In County Cork, salmon and sea trout anglers enjoyed good sport on the Owenmore Fishery, while many fisheries on the Munster Blackwater also reported excellent angling.

In the west, the Moy saw a phenomenal week’s fishing with big numbers of grilse being caught throughout the entire system! Staying west, anglers on the Galway Weir got their share in grilse fishing as well! Amongst the successful anglers was former Fishery Manger, Ned Cusack. Landing two salmon at the age of 102 is an outstanding achievement and therefore is our Catch of the Week! Most people would do well to even reach that age, never mind being able to fish for salmon.

Ned also landed an invasive Pacific pink salmon on his afternoon fishing at the weir. Pacific pink salmon are a non-native species to Ireland and, if they become present in sufficient numbers, may negatively impact our native Atlantic Salmon. As a result, Inland Fisheries Ireland has issued an alert and is asking all salmon anglers to be aware of the possibility of catching a Pink Salmon, making sure not to release any back to the water, and to report any sightings to IFI.

We would also like to remind anglers that the final 2021 brown tag draw for Salmon Anglers on the Lower River Lee, No. 5 or Cork District is taking place tonight. Further information on how to apply is available here.

July can be a tough time for trout anglers which was reflected in the few reports we received for the week. However, Mick Flanagan and his boat partner Dermott O’Toole enjoyed decent dry fly fishing on Mount Dalton Lough just outside Mullingar, while the calm cool weather made angling extra difficult for anglers on Lough Conn.

In the absence of any pike fishing reports we would like to draw your attention to another great pike flytying livestream by Norbert Renaud of L’Ile Verte Fishing Lodge. You can check out the stream here from 7pm Irish time this evening. 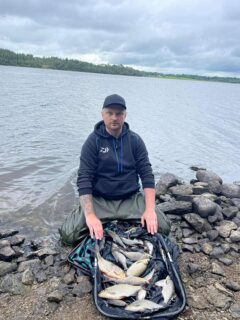 Some say there’s no bream left in Ireland, but Arthur Senior Judge, a member of Midland & District Coarse & Pike Anglers (MADCAPS), made a mockery out of that on the Shannon with a super haul of 10 bream for 70+lbs.

With the sea angling season in full swing, we have received numerous excellent reports from all around the coast, including fantastic tope and hound fishing in Wicklow.

A great night session producing specimen conger, loads of blues and fine ling was reported from Courtmacsherry, while fishing in West Clare  remains excellent as well.

With the tuna season approaching, anglers in Ireland are taking part in a unique catch, tag and release programme to help Irish and international scientists learn more about the largest tuna in the world – the Atlantic bluefin tuna. Further information about the Tuna CHART programme and a full list of 2021 authorised skippers can be found here.

While parts of Continental Europe experiencing devastating and unprecedented flooding with whole river valleys devastated and many lives lost, Ireland is heading towards a “heat wave” with long hours of sunshine and temperatures peaking close to 30 degrees Celsius in some parts of the country! As the UV index will remain high in the coming days always wear sunscreen and protective clothing when outdoors!