On an apple-ripe September morning, through the mist-chill fields I went, with a pitch-fork on my shoulder, less for use than for devilment.

Patrick Kavanagh captures it well and those anglers who set their early morning alarms in the last week may have seen the mist-chill fields first hand. The summer mornings that saw Kavanagh ‘shovelling up eels again’ from the drain are becoming more of a distant memory now, as the evenings slowly begin to draw in upon us…

It’s close to the stony grey soil of Kavanagh country where we start his week, the Irish Feedermasters Final was held on Lough Muckno last Sunday, Sept 12th, and well known angler Philip Jackson topped the field to take the title. A much scaled down Monaghan Pairs event is currently taking place at the venue this week.

September is the month of the year when coarse angling should take centre stage in Ireland, with back to back festivals held each week on reliable venues around the Upper Shannon, Cavan, Monaghan and Inniscarra Reservoir. Vans crammed full of nets, rods, poles, bait and seat boxes pour off the ferries and head for the towns and villages that host these events; where anglers meet old friends and make new ones. This year, as with last year, there is a big ‘overseas angler’ shaped hole in the schedule, as anglers are reluctant to travel until this virus is behind us; we hope that this festival void will be filled by a full calendar again in 2022.

One such festival with a strong field of visiting anglers that did take place earlier in the month was the Dutch King’s Classic, where nearly 40 Dutch anglers adhered to strict Covid 19 protocols to participate in an excellent event in Leitrim’s lakelands. Event organisers are confident that they can double the numbers for next year, such was the success of the festival.

Elsewhere, the All Ireland Feeder Championships were held at Oaklands Lake in New Ross, where Enda Hickey came out ahead of 29 other anglers to take top prize. In Longford, Kevin Lyons of Melview Lodge was delighted to be able to welcome back some of his Belgian clients and they had great success fishing for Bream, Hybrids and Roach. They also tackled some good pike and hope to return again over the winter for some more piking.

Inland Fisheries Ireland were delighted to be able to sponsor two anglers with disability to take part in the event aboard the Lough Ree Access For All boat; we believe that this is a first for the event, hopefully not a last. 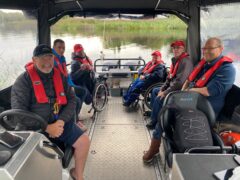 Also on Lough Ree, the Romanian C&R Angling Association held their Predator Challenge with 30 boats and 60 anglers. They used the really innovative Score Fishing app to assess the results – we believe this is the first time it was used in Ireland and it definitely won’t be the last time. The Romanian C&R AA are also hosting the Pike Master Ireland event again this year, so anglers who are interested should sign up for that.

In Cork, Tir na Spideoga were thrilled to welcome back some French guests who did well on Lough Allua and thirteen year old Harley celebrated his birthday on the Erne system with his PB pike, PB perch and greatest amount of perch ever! Not far away in Cavan, Norbert Renaud of L’Ile Verte Lodge wanted pike but got pike-fly-perch instead, not that he minded at all! 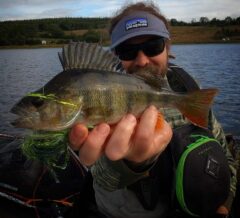 In Waterville, a flood on the Inny meant that the fishing improved for a short while and some salmon were landed. On Currane, fly anglers managed both brown and sea trout on the drift. In Mayo, there were noticeably fewer anglers on the Moy this week and conditions were mixed for those that did fish; however, they still managed to land a reported 84 fish.

Trout anglers were quiet this week, although one report suggests that fishing might pick up on the loughs before the season is out; it was Lough Arrow that fished well, with some good trout responding to fresher conditions and falling to traditional wet fly methods.

Offshore, the Dunmore East Small Boats Competition took place on Sept 4th and 5th and 14 boats took part. Weather was mixed, but anglers still managed to land 39 species during the event. In Clare, anglers had some nice bull huss and ling while over in Wicklow, Skipper Kit Dunne’s exploration of east coast wrecks in recent years is starting to pay off with some thumping pollack and other wreck fish.

The tuna fleet continue to catch, tag and release some massive bluefin under the CHART tagging programme. Fishing has been steady in Donegal Bay for quite a while now, and that has continued this week. Tuna were slower to appear in the south, but fishing has really picked up off the south coast since the beginning of the month, with Silver Dawn landing her biggest fish ever this week – a brute of 100+ inches. Not to be outdone, the Chloe Jay, Lady Patricia and Loch an Iasc all managed to tag good fish this week too.

Closer to shore West Cork Bass had a stern tackle test with some thumping pollack and decent bass, which is more than can be said for anglers on the east coast, where bass have been hard to come by this week despite the efforts of good numbers of anglers fishing the Boyne estuary.

We usually like to award a Catch of the Week to an angler who catches an exceptional or unusual fish but this week we have an Anglers of the Week Award which we will award to brothers Jonasz Nowak (9) and Miłosz Nowak (6).

Armed in two light pole rods (with tiny float rigs) and a humble dropshot set up, nature fanatics Jonasz and Miłosz managed to catch (and release) six different species from Dun Laoghaire harbour in what turned out to be the best day of their lives. This is just the beginning boys, well done, your futures in fishing look bright!

Each of the 31 river channels has been prioritised for enhancement works based on its hydromorphological condition, which considers how far the state of the river had departed from its natural condition.

The prioritisation follows extensive consultation with stakeholders, including local angling clubs, the National Parks and Wildlife Service and the Office of Public Works. In addition to hydromorphological surveys of the river channels, a review of the physical and ecological characteristics of the watercourses in the catchment were carried out, including water quality and fish status analysis. A high priority was given to channels with moderate and good water quality; as well as those with low fish status.

Tonight will be mainly dry though drizzle may linger in some eastern counties. Some mist and fog developing, lows of 6°C to 13°C.

Saturday will be mostly cloudy in the east with some patchy rain, sunny spells further west with rain developing in the afternoon. Highs of 15°C to 18°C with light variable breezes. Outbreaks of rain overnight, turning heavy in places later. Lows 9°C to 11°C with light breezes.

Generally dry for early days of next week; followed by cool, wet and rather windy spells.

If you’re heading to sea, don’t forget to check the tides.