The past week has seen above-average temperatures as the last of the summer clings on against the advance of autumn (perhaps making amends for the damp and dreary June we had to endure). Rain too has been held at bay in most of the country, where all bar the south west experienced drier than normal conditions. This has not been music to the ears of salmon anglers, who have been praying for rain to freshen the rivers up, giving them a final chance of some decent fishing before the season’s end. And who knows, with heavy rain forecast for later this weekend, their prayers might be answered, but will it come too late for them…?

While the country has enjoyed the early autumn sunshine, there has been a general feeling of winding down on most of our fisheries as anglers and fish alike prepare for the long winter break. Trout anglers now have only a week left in their season, and by the sounds of it, many have already packed their rods away for the year. The angling effort on Lough Sheelin has been low, with only a handful of boats out on the lake every day. And, despite the weather being warmer than some days during the mayfly, the fishing has been slow, with only the odd trout showing. It wasn’t much easier on the other midland lakes as angling guide Mick Flanagan reports that fish have been scarce on both Lough Ennell and Lough Lene, with only a single trout to show for a couple of days effort. And it’s not much better further west, as anglers on Lough Conn reported slow action for the week. They did seem to manage a few smaller fish but struggled to get anything near the 1lb mark.

Salmon anglers are also nearing the end of their season, and reports are that salmon catches are tapering off on most of our fisheries. In the north east, the lack of rain this month means that the rivers are running low, slow and clear and no fish have been reported caught on the Dee, Fane or Glyde, despite the latter seeming to have a decent head of fish. On the Boyne, the picture is much the same, although a couple of fish have been landed over the past week or two, with the best being a 14 pounder. Down in Waterville, there was enough rain to put the Inny in flood and anglers lucky enough to fish the river during the spate managed a few fish. Those that fished the lake boated a few juniors and brown trout but not much else. Unfortunately, the Blackwater hasn’t seen the hoped-for influx of fish that can sometimes occur in the final weeks of the season, and fishing has been poor, with only the odd resident fish showing. Some of the west Cork rivers performed better, with both the Ilen and Comholla returning reasonable numbers for the week. Over on the Moy, there was sufficient rain to keep the river topped up, and 152 salmon were landed for the week, with East Mayo and Mt. Falcon being the most productive areas.

Many of the coarse angling festivals that fill the calendar in September have had to be scaled back due to the lingering effects of Covid restrictions. We are seeing lots of mini-matches and small knock-ups taking place around the country which is great to see, but few have been sending in reports to us. One report that did make its way to us was for a small match held on Lough Muckno in Monaghan, where Conor Browne dazzled all before him with his excellent pole fishing skills and bagged first prize with just under 100kg for the 5 days of fishing. Anglers who fished the Carrick Festival in Carrick on Shannon all seemed to have a great time with plenty of 20kg+ catches making for good competition. Over in Longford, Kevin Lyons welcomed back some long time regulars, and it wasn’t long before they showed they still had the knack for catching in Ireland with plenty of roach, skimmers and some cracking tench to show for their efforts.

While all other freshwater fishing is winding down for the year, many pike anglers are dusting off their deadbait rods in anticipation of getting back to some serious winter piking. A couple of the Leinster Pike Anglers were out on an early season session and rustled up a fish or two using wobbled smelt and artificial frogs. Up in Boyle, a couple of  Austrian anglers fishing with Bodo Funke had some great fishing on the fly, including a whopper pike of 111cm.

And it’s pike angling that brings us a most unusual but very worthy Catch of the Week this week as young angler Callum Clarke managed to fish his grandfather out of the water, almost certainly saving his life. The two had been pike fishing when a sudden gust of wind knocked grandad Sean into the water. 11-year-old Callum kept his wits about him and managed to get a board to his grandad to hold onto before manoeuvering him safely to shore. Sean had been wearing a life jacket that failed to fire, which should serve as a reminder to us all to test and service our lifejackets regularly. 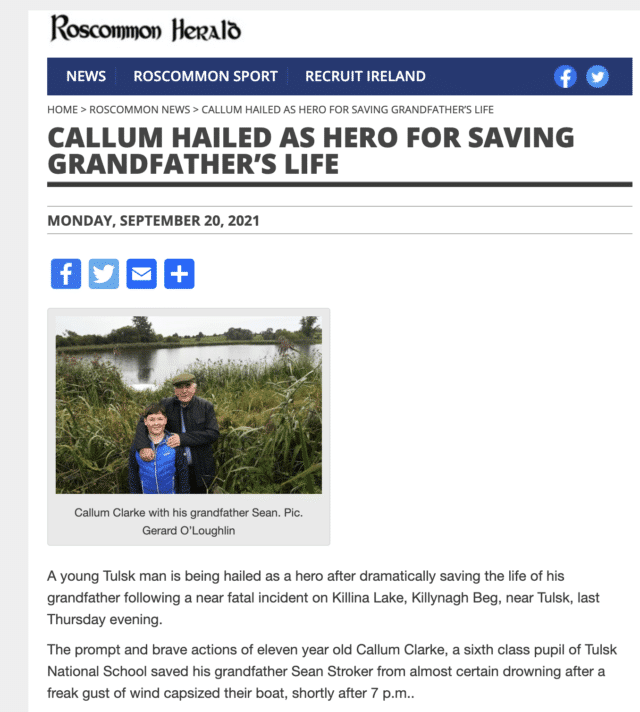 Sea anglers are still enjoying some good sport, and punters onboard the Brazen Hussy 2 in Galway Bay had some exciting light lure action targeting a range of species, including cod and pollack. Down the coast in Clare, Carrigaholt Skipper Luke Aston made the most of the shelter provided by the Shannon Estuary to target some super double figure thornback rays and then, once the wind died off, headed out west to find some nice shark fishing. Mark Gannon from Courtmacsherry welcomed some Dutch anglers back to his boat, and they hit a couple of inshore wrecks with impressive results, catching a nice mix of ling, pollack, coalies and cod. And it was double Dutch this week as Wicklow Boat Charters also welcomed some Dutch anglers back to the east coast, and they enjoyed some quality species fishing with a couple of specimens thrown into the mix.

On the shore angling front, Killybegs Mariners kicked off their winter league against the spectacular backdrop of the Northern Lights. 22 anglers turned out for the session, and they weren’t disappointed as a total of 9 species were landed on the night, with Stefan Martin coming out on top with 14 flounder and a weever fish.

Finally, we had a report in during the week of a beach in the south west that was left in a bad way when a large number of anglers dug extensive trenches to collect lugworm but failed to fill the trenches in after them. This left the beach in a bad way for other users, and locals and tourists alike were justifiably annoyed. So, we would like to urge all bait diggers to respect the rights of others to use the beach and to fill back in holes and trenches when you have collected your bait.

It will be mild and mostly dry tonight, with winds easing back to light south-westerlies. It will remain relatively mild tomorrow, with patches of sunny weather breaking through the clouds from time to time with the odd drizzly shower mainly in the western half of the country. It will continue mild on Saturday night, but the wind will freshen through the night bring strong gusty winds from Sunday morning accompanied by heavy showers. As the rain passes eastwards, temperatures will become noticeably cooler, and Monday and Tuesday will see some more heavy showers with the possibility of a thunderstorm or two.