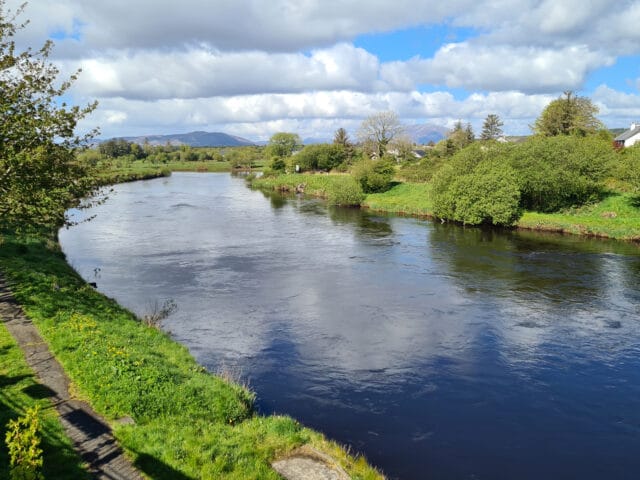 Milder and drier weather at the start of the week gave way to heavy rain towards the end of the week impacting on angling and causing water levels to rise. Anglers remarked on the cold sting in the air for this time of year.  One hundred and sixteen salmon were recorded from all fisheries in the Moy catchment for the week.

Another fine salmon of 16.2 lbs. was reported from the Knockmore waters, caught by local man Martin Devers. This fish was caught on a worm in Padden’s Pool. Knockmore Salmon Anglers permits cost €20 for a daily permit and €60 for a weekly permit.

The Ridge Pool recorded 2 salmon for the week, one for 8.5 lbs. caught on the fly and one for 5 lbs., caught on a black Flying C.

Ballina Salmon Anglers reported 15 salmon caught for the week, with anglers reporting a lot of smaller grilse starting to run.

Byrnes Fishery recorded 6 salmon for the week, the best of which weighed 12 lbs., all caught spinning.

James Cornally from Offaly had a 13.5 lbs. salmon on the worm in Gannon’s Fishery who reported a total of 6 for the week, the smallest weighing 9 lbs.

Granville Nesbitt reported 10 salmon from the Foxford Fishery, the best fish weighed 12 lbs. and was caught on a worm.

Despite the inclement conditions during the week Foxford Anglers reported 15 salmon caught.

East Mayo Anglers recorded 25 salmon in total for the week with 3 released. Lenny Thompson had the biggest salmon from the fishery at 15 lbs. and a second salmon for 6 lbs., both caught on worms. Michael Curran from Clare had a 13 pounder on the fly, while Kenneth Corcoran had a 14.5 lbs. fish on the worm.  Isabel Gallagher from Swinford landed a 13 lbs. salmon whilst spinning.

The Cloongee Fishery had 3 fish for the week.  John Cooke from Laois had an 8.5 lbs. salmon while spinning.  Brian Heraty from Meath had 2 salmon, one of which weighed 7 lbs. caught while spinning and the second fish weighed 10 lbs. and was caught on a worm.