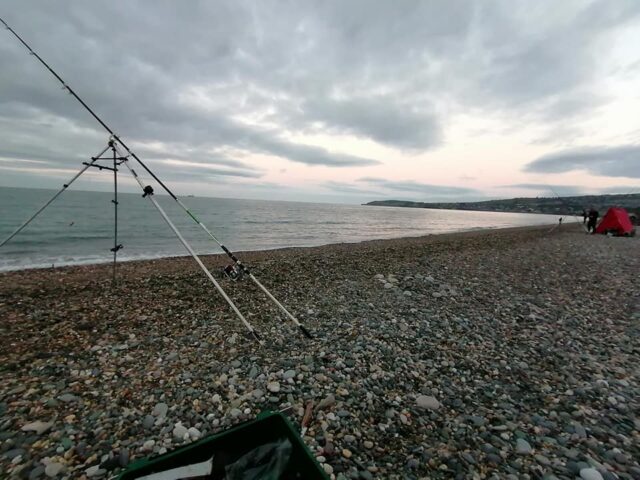 South Shore Sea Angling Club were back on the Wicklow beaches for the first competition of the year. This report is taken from their Facebook page:
“The north beach Wicklow was the venue for South Shores first competition since last year. A warm day turned out to be a lovely evening with light winds and a calm sea.
A lot of hard work in the background by the committee to get this competition going.
Kick-off was at 7 and we had a minute silence at 7 as a mark of respect for our two founder members, Eddie Bermingham and Tommy Keogh. It was very touching to see all anglers walk down to the edge of the water holding their rods out to sea, respect.
Lots of dogs were expected with some whiting in the mix, however, it was the opposite, whiting with dogs in the mix. The low numbers were the expected hot spots and they didn’t disappoint.
Of course, when you put great anglers on favoured pegs the results are inevitable.
Paul Whelan put in a stellar performance to claim the top spot. He had the best bag of fish and also claimed the longest flat with a great ray of 82cm on his last cast, great fishing Paul.
Hot on his heels in zone A was the (great white) Thomas Keogh the doggie mugger.
We had a new lad Robbie Smith, by all accounts, this lad is a flier on the beach, 48 fish is some total, well done lad. It’s great to see the new young lads doing well, and another new member Ciaran Fogarty who was second in zone B, great fishing lads. We had an auld shark hunter John O Brien win the longest round with a Tope of 73cm.
Two juniors braved the late-night and were rewarded with good fishing, both had 12 fish with young Cathal O Reilly running out the winner. Great to see juniors getting in amongst the fish.
Well done to all for turning out to support the club competition. Our club is going from strength to strength with new members joining.
We paid out 6 prizes in each zone plus junior and OAP prizes also longest round and flat, so great value for your entry fee. And oh yeah a peg draw for those not in the prizes, it’s win-win.”