David Norman of West Cork Bass has been out on the kayaks in pursuit of big pollock and top-water bass lately. David was out with @irelandonthefly for a crack at the Clonakilty bass in the surface layers and the fish didn’t disappoint. 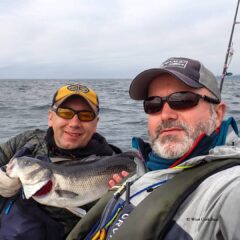 When the sun came out a few days later, David switched to deeper tactics for big pollock on fly and lure. Again, the fish were obliging for fights and photos, before being released back to the depths.

The best of the pollock, which measured 75 cm and probably approaching double figures, was caught on the Pirate Lures’ “Wrasser” soft bait.  David reckons that the bigger pollock seemed to be absent or inactive inshore during June, but hopes they’re back in action for the rest of the Summer and Autumn!

Good fishing all ’round.

David Norman is a Clonakilty based Bass Fishing Guide and Coach specialising in Shore Based Lure Fishing & Workshops.

Notes: Having intensively fished for Bass (Catch & Release) on the West Cork Coast plus all of the recognised Bass fishing counties of Ireland  I want to share with other like-minded anglers the thrills of responsible lure fishing for Bass on a One-to-One basis over a limited number of trips throughout the key times of the Bass fishing Year, which for me is June – Sept, sometimes earlier or later depending on how the weather is behaving…
I can offer a range of options around key tides, to include night fishing, in a safe and environmentally conscious manner including bespoke workshops to help build knowledge and confidence