Inniscarra Lake finally welcomed back the Sensas Float Pairs over the May bank holiday weekend after a two year break. A total 833kg of fish were caught by the 24 anglers from the Garden Centre and Graveyard sections. This was outstanding sport fishing with an average match weight per angler, per day of over 17kg.

Congratulations to the Munster angling pair, Tommy Lawton and Trevor Platt, who won with 5 points and 85.480kg. 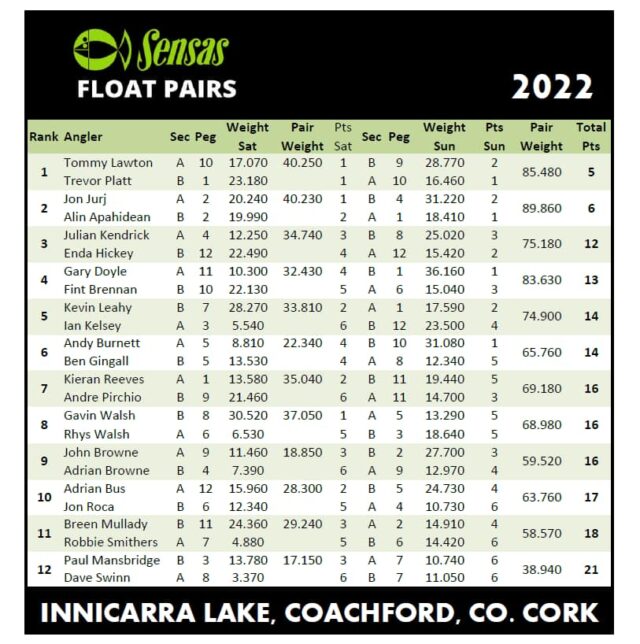 Event organisers would like to thank to all who joined us in Coachford to take part in the competition, to O’Callaghans Bar & Guest House for their hospitality, Inniscarra Lake TDL, Trevs Tackle Ireland and Margaret and John and other landowners for allowing us access.

With a number of anglers staying on after the Sensas Pairs two day match, we decided to run an Open match today on the Garden Centre. This section had been fishing very well over the previous 3 days so a decision was made to run the match there. With big skimmers and bream making an appearance the previous day no one knew how it would fish but there definitely were some favoured pegs.

The match started with everyone catching well, some suffered with highly frustrating skimmers getting too excited over their groundbait and some were catching the favoured chunky hybrids and roach. First and second came from both end pegs, Alin having had a spell of catching some bream all on the whip, with one bream of 2kgs coming on a 4m whip.

On the other end peg Jon was catching quality hybrids and roach with a bonus bream. It was those fish that swung the match to Jon who weighed in just over 43kgs.

Two anglers caught a very rare Inniscarra tench each today as well. These rarely if ever show in catches.

Coarse angling on Inniscarra and Carrigadrohid