We have had an unseasonably mild run of weather in the last few weeks, with daytime temperatures hitting the mid-teens on occasion. In the week gone, those mean air temperatures dipped a little, but remained between 9°C to 12°C – which is still between 2°C and 4°C above average for the time of year. The week ahead will be much cooler, with expected mean air temperatures of 4°C to 10°C – that’s 1°C to 3°C below average for most places – so wrap up well if you plan to tackle some winter whiting or codling from the beaches, walk the banks of gravelly streams in search of the first signs of spawning salmonids or cast a deadbait for a big pike in a deep lough…

We start this week’s angling report with a big pike from a deep lough and it was on Lough Erne that guests of Guided Predator Angling managed to catch the same big pike twice in less than a week. This pike, which is our Catch of the Week, is proof that careful catch and release fishing can help to sustain our fish stocks. On Lough Derg, guests of Anglers’ Paradise had to work hard to hit it big and a day that started slow came good in the end with fish up to 105cm caught to both lures and the troll. On the competition scene, twenty two of the Leinster Pike Anglers travelled to a lough venue where high water made things tougher than they had hoped; it wasn’t too bad for the winner on the day though, who caught twelve pike to top the table.

The Sensas Riverfest Final was held last weekend in the River Barrow near Monasterevin and anglers there had to put up with very high water and a much faster flow compared with normal conditions. Elsewhere, winter leagues are well underway at this stage and anglers have been braving wet and windy weather, as well as high water, to compete in their club competitions around the country. In Leitrim, Lough Garadice was tough going for the C/M Lakelands anglers who really needed their rain coats. In Cavan, the Belturbet club cleaned out the old pegs on the canal in search of something different and were pleasantly surprised with the fishing there. Over in Fermanagh, the Erne Anglers made good use of the jetties available to them to fish their league match while, in the east, the Royal Canal fished pretty well for the Royal Enfield Angling Club. 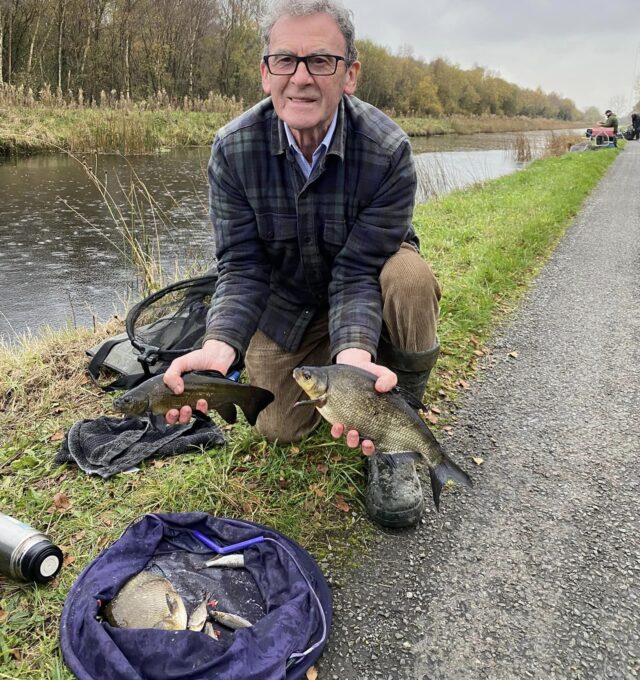 The weather has disrupted the charter fishing for our fleet in the last number of weeks, especially those tuna boats whose bluefin season closed last Saturday. All in all, the season wasn’t too bad, although some of the skippers who had hoped to finish the season with a flourish had no choice but to spend the last weeks sitting in hope of a window of opportunity to get out. When opportunities for charter fishing came this week, some good fishing was had by offshore anglers, like some double figure pollock in Donegal.

Back on dry land, the South Shore SAC were thankful of the shelter provided by Wicklow Head as a strong southerly wind tested their winter league anglers and in Cork, Cork SAC mixed it up with bass, codling, dogfish and some nice painted ray during their club competition. In Clare, lure angler Tomas Janicek recorded an enjoyable session in north Clare, starting before dawn at a known bass and pollock mark.

For fly anglers and fly tiers wondering what to do with themselves as the evenings darken further, we have a couple of blogs in from well known fly tier Jackie Mahon, who features some of his favourite flies – the Claret Dabbler and some of the Lough Melvin specials that helped win the international fly-fishing championships on Lough Melvin in June earlier this year. We also received a late report on the Irish team’s success in the Five Nations Fly Fishing International held in Cork and Kerry back in September and, for those of you who like to chill out with a good fishing podcast or two while you tie your flies or sort out your fly boxes, check out the latest Ireland on the Fly podcast which looks at the fate of Loch Maree in Scotland, once famed for its sea trout.

Public consultation is now open on the draft Wild Salmon and Sea Trout Tagging Scheme (Amendment) Regulations 2022. These measures provide for the management of the wild salmon and sea trout fishery by Inland Fisheries Ireland from 1st January 2023. If you would like to make a submission, you can email  IFDPublicConsultations@decc.gov.ie.

Inland Fisheries Ireland is working on a new Customer Charter and Action Plan for 2023 to 2025. Customer Charters are short statements, describing the level of service that you can expect from a State agency. We are now conducting a quality assurance review of our existing customer charter and we would welcome your feedback and suggestions – for more info, check out our corporate website.

Friday night will start cold, dry and clear with just a few mist patches. Frost will develop with temperatures between -1°C and +3°C.

Saturday will start off dry and bright in the east, with rain in the west spreading to all parts by evening and turning heavy at times. Strong and gusty southerly winds will develop, easing later. Highs of 6°C to 11°C.

Sunday will be bright and breezy – highs of 6°C to 11°C with sunshine and scattered showers. Clear and cold to start overnight with heavy rain moving in by Monday morning.

For early next week the outlook is cool and unsettled with further spells of wet and windy weather possible.