This can be the toughest time of the year for many fishermen and women, with all the fuss of Christmas behind us and the slog of January and February, our two coldest months in Ireland, ahead.

While there are fish to be caught by hardcore coarse fishers, winter pike and perch hunters, shore anglers and those in the hunt for a spring salmon on an early-opening river, the going can be tough. The best of the brown trout and coarse fishing can still seem a long way off, with the run of summer grilse and sea trout even further away. Most charter boats won’t drop a line until March or April at the earliest, around the same time that bass anglers in most parts will finally think it worthwhile chucking a lure.

There are, of course, plenty of stocked fisheries available for the avid fly anglers to maintain the muscle memory in their casting arms – you’ll find an extensive list of those here. Sometimes the best medicine for the head in the cold dark months is to just get out on the beach, river, canal or lake shore and have a cast or two with some fellow anglers. Talk with comrades about good times past and the hopes of the season ahead; this time of the year the catching of fish is not obligatory, but catching up and keeping in touch should be.

Those anglers who did wet a line in the last week may have noticed that, while the sunsets have been getting a little bit later since the middle of December, the mornings have finally started to brighten a little bit earlier too, so going by the clock, we can finally see our days lengthen at both ends. That being said, anglers were thin on the ground again this week, and fish were even thinner.

At the time of writing, there have been no reports of the first fresh salmon of 2022, though anglers on those early rivers, like the Drowes and Leannan, have been trying. A total of 81 Irish rivers are open for salmon fishing this season and, while 45 of those rivers are open for harvest, please consider releasing our precious salmon in 2022.

A handful of pike anglers did see some action this week, most notably 10-year-old Séan Condron who caught his best ever pike and 13-year-old Shane Gorman, who caught his first ever pike. These two hardy young anglers share our Catch of the Week. Also after a pike on one of our canals was Artur Pikeseeker, who caught a cracking 105cm fish.

As ever in winter, coarse fishing has been slow. The CM Lakelands Feeder Club have still been active though, with matches on Garadice and Muckno last weekend. The Church Shore on Garadice saw the best of the bags, which fell to Rimantas Kondrackas at 7.180kg. 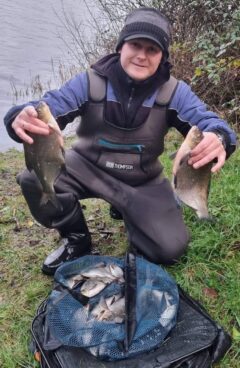 This week Sensas announced the launch of Sensas Ireland Riverfest 2022. This is an any-method competition to be held on rivers all around Ireland. There will be six qualifiers held on six different rivers; the rivers Suck, Shannon, Barrow, Bann, Erne and Blackwater. The final will take place on November 12th/13th on the River Barrow. For more information see the Sensas Ireland Facebook page.

While most of the country were making the most of the Christmas downtime in the last couple of weeks, the IFI web elves have been busy adding some new features and directories to our angling website. You can now search for qualified instructors and ghillies (guides), charter boats and tackle shops through our interactive maps. Simply click on a marker to find out more about that tackle shop, charter boat or angling guide or instructor. You can enter your address (or any address) in the search bar to find guides and services near you… 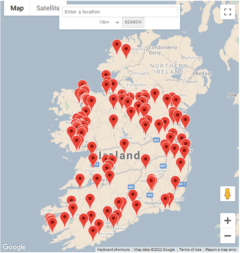 Finally, a reminder that angling clubs, groups and associations all over Ireland are being invited to apply for sponsorship funding before the January 21st deadline. The €30,000 fund will have a particular focus on initiatives aimed at beginners and young anglers, as well as events that promote sustainable angling tourism.

Rain will spread eastwards across the country on Friday night, turning heavy at times. Temperatures will vary from 0°C to 8°C, lowest in the north.

Milder conditions will extend across the country overnight and rain will quickly clear on Saturday morning with sunny spells and often heavy showers following from the west, highs 4°C -7°C in the afternoon. Long dry periods and clear spells in most places on Saturday night, lows of 1°C – 4°C generally.

After a dry start, rain will develop in the southwest and spread to all areas through Sunday afternoon, highs of 7°C – 11°C. Cloudy overnight Sunday with some rain, lows of 5°C – 9°C with increasing southwest winds.

The outlook for next week is for sunny spells and showers; however, high pressure building to the southwest will bring more settled and drier conditions through the end of the work week with temperatures slightly above average.

Safe fishing to all and tight lines, especially here in Ireland. If you’re heading to sea, don’t forget to check the tides.