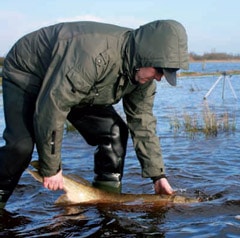 When deadbait fishing, a take should be struck sooner rather than later to avoid deep hooking the fish. The pike should then be played firmly and brought as quickly as possible to the landing net to avoid over tiring the fish. A suitable large landing net should be used particularly from a boat.

Some fine pollack for anglers onboard Fiona Tee