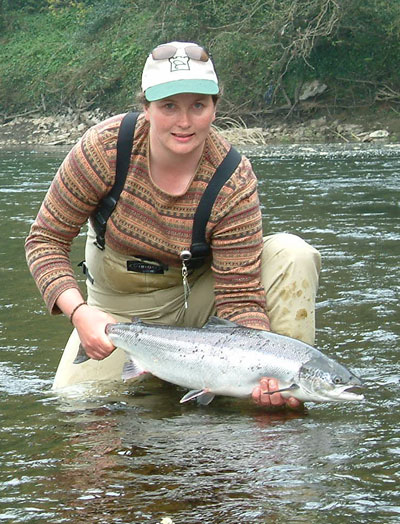 If intending to return one’s catch, it is important the fish is played firmly and brought as quickly as possible to the landing net, so as to avoid over tiring the fish. If fishing ‘catch and release’ barbless hooks are recommended. A suitable knotless mesh landing net should also be used to land the fish, particularly from a boat. Some anglers now unhook the fish without even touching them, often with the use of a ‘Ketchum’ type device. If planning to take the fish, a suitable priest is required.

When photographing fish, they should be cradled and supported properly to avoid injury. At all times, the fish should be returned to the water in the shortest possible time.

National bag limit for salmont – anglers can catch up to 10 salmon in a season depending on the licence they purchase and the rivers they fish.

When purchasing a licence in Ireland, one will be issued with tags and a copy of the rules and regulations governing their use. These new rules include bag limits and restrictions on the style of angling. It is important that anglers familiarise themselves with the rules of the particular fishery they are on.

On Catch and Release Fisheries, the law requires you to adhere to the following regulations;