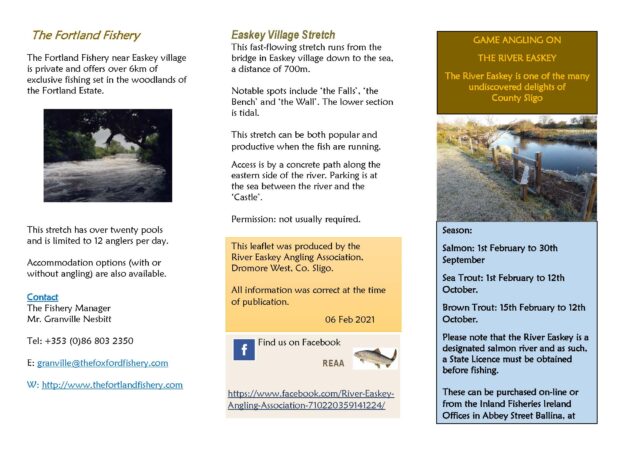 The Easkey River is a picturesque spate stream of approximately 20km in length. Its principal source is Lough Easkey situated high in the Ox Mountains which straddle Counties Mayo and Sligo. It flows through mountain bog and rough pasture before entering the sea at the lovely town of Easkey.

The river gets good runs of salmon and seatrout from early June and each summer spate brings fresh run fish right up to the end of the season.

Most of the water is suitable for fly fishing with a single-handed rod and there are some beautiful secluded pools which can produce wonderful sport any time between June and September.

The Fortland Fishery, situated in the lower end of the Easkey River, comprises approximately 3 miles of double bank angling for Salmon & Seatrout in a beautiful & secluded wooded estate setting.

The River Easkey Angling Association was formed to protect, promote and develop angling on the river.

The REAA controls approximately 12km of double bank fishing on the River Easkey from its confluence with the Gowlan River downstream to Hanley’s Falls, which is approximately 1.5km below the Workhouse Bridge on the N59 Sligo-Ballina road.

Access to the REAA waters is from the Workhouse Bridge and from the roads which run south of the N59 on either side of the river. 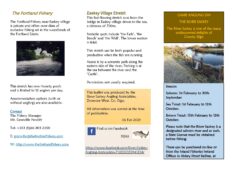 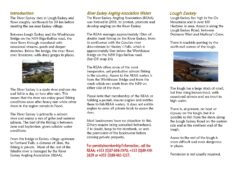 The rest of the river

The Fishing Rights are in the hands of numerous owners, some owners allow access while others do not. It is imperative the angler establishes ownership of the portion of water he wishes to fish, and obtains permission from the owner.

Salmon fishing in Mayo and Sligo