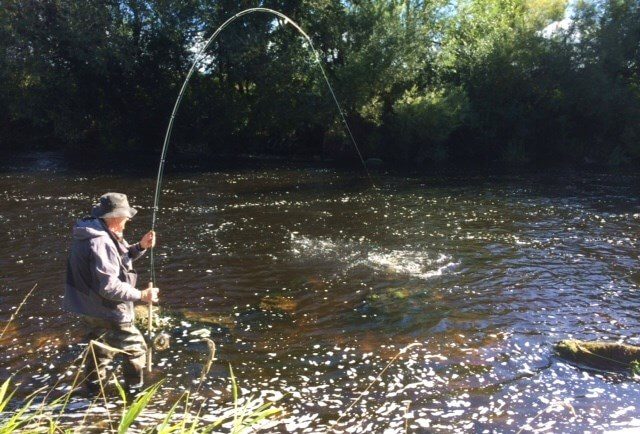 The Atlantic Salmon (“Bradán” in Gaelic), is a native Irish fish. Most rivers get a run of salmon from Spring until Autumn. Salmon can be caught in Irish waters from January through to October. The bigger fish known as ‘Springers’ tend to run in the early months of the year and weigh an average of nine pounds. A spring fish from cold water, silver, muscular and graceful, is magnificent. To catch one, especially on the fly is a triumph and anglers have the best chance of taking a ‘Springer’ in rivers such as the Drowes in Co. Donegal or the River Laune in Co. Kerry. They can also be caught in loughs such as Lough Currane in Co. Kerry which produces some fine fish from February onwards.

The biggest run of salmon comprise of grilse or summer salmon. They are the most sporting of game fish and are swift, acrobatic and ready takers of a well presented fly or lure. They weigh from three to six pounds and are widely found throughout the country. The timing of the main runs varies between river systems but most begin in June. This is when fisheries like the Moy in Co. Mayo and the Munster Blackwater in Co. Cork can provide spectacular sport in a natural setting. Irish grilse runs are some of the most prolific in Western Europe and offer the salmon fisherman the best chance of success.

Many Irish rivers also have large runs of salmon with the first rains of the autumn. This autumn run often makes up the bulk of the adult salmon returning to any catchment. These fish continue to come into the systems after the season closes and so ensure productive salmon fishing on many waters right to the end of the season.

The long standing record for an Irish salmon, a fish of 57 lbs, was set on the River Suir by Mr Maher in 1874. It is unlikely to be beaten in the near future. Currently a salmon over 20 pounds is classified as a specimen fish and only a small number of these are recorded annually.

Salmon are an elusive and complicated quarry for the angler and their behaviour can be greatly affected by many factors, including the season one chooses to fish, the prevailing weather conditions or even the time of day. It has been established that they do not feed in freshwater and so the reason why they are tempted to take bait or a well presented fly is not known. Furthermore, when they first enter the lough or river systems, they are more willing to take a bait or fly but the longer they sit in freshwater the more dour they become.

When salmon move into freshwater in the colder months of the season, they often progress slowly up rivers. However, as the water temperature rises, this is reflected in the salmon’s metabolism and they become more active. For salmon anglers who fly fish the key water temperature is 7C/45F. Below this temperature one should fish a sunk fly and above this temperature salmon will move to one fished on a floating line. This is also true for other forms of salmon angling and the old adage would be ‘when cold, fish slow and deep. During the summer the best taking times for salmon are very early in the morning and the last thing at night.

For the angler in Ireland the main methods employed for game fish will be:

All angling methods are subject to national and local regulation, which may be subject to change.

The classic way to fish for salmon is with the fly. Double handed rods are not always essential and generally the Irish angler favours single handed rods.

On most Irish rivers one would need nothing larger than a 11’6 ft rod (AFTM 7 / 8) with a floating line – there are the odd exceptions such as the Cork Blackwater or the Moy where the double handed rod comes into it’s own for use with sinking lines in cold water. Reels (dependant on river size) should hold at least 100m of backing. Leaders should use at least 12lb monofilament and are usually for single fly, particularly on rocky rivers. This is because with droppers there is always a danger of hooking up one of the flies when playing a fish. Traditionally the river current imparts the movement to the fly. As such, the slower areas of river are usually not favoured by the salmon fly fisher. However, to get past this problem, it is not uncommon on rivers such as the Moy or Mourne for anglers to use bubble and fly. This is usually fished using spinning tackle.

Fly-fishing for salmon on loughs is an Irish specialty. Most loughs fish best when there is a ‘good wave.’ Rods to 11ft 6in (rated AFTM 7 / 8) are used and salmon are fished for in much the same way as one fishes for trout. The majority of fishing would be using floating lines. The standard cast consists of 3 or 4 flies. Tapered casts down to 10lbs would be recommended. The point fly is often a shrimp fly, with the droppers consisting of standard trout/sea trout flies size 10 or 12. It would be more than usual for one of these flies to be a Green Peter.

Ireland is the birthplace of many famous salmon flies such as the Thunder and Lightening, Black Doctor and Connemara Black. However, when one thinks of fly patterns, the shrimp fly must be seen as the quintessential Irish style. The salmon shrimp fly was invented by Pat Curry of Coleraine who tied the original Curry’s Red Shrimp. When opened, the predominant colour of an Irish fly box holding shrimp patterns is a rich orange hue the same colour as a good whiskey. Though everyone has their favourites, one would never go too far wrong with patterns such as the Apache Shrimp, Bann Special Shrimp, Delphi Badger, Wilkinson Shrimp, Curry’s Red Shrimp or Foxford Shrimp. Irish flies tend to start on the small side. Size 8 being used in the cold/ early spring, then as the water warms, the flies being scaled down to 12’s and 14’s. Other salmon flies such as the Tosh, Ally’s Shrimp, Cascade, Willie Gunn, Hairy Mary, Silver Stoat, Green Highlander and the Collie Dog all work and account for fish every year.

Spinning for salmon can be a very effective method when conditions suit. In heavy water it may also be the only realistic option to take a fish. An 8 to 10 ft rod will be able to cope with most conditions. Fixed spool reels should hold at least 100 – 150m of 10 to 15lb monofilament / braid.

In the early season one might use 3in Devon Minnow or large Toby’s, these being fished slow and deep to get to where the fish are lying. At present the favoured spinner in Ireland would be the Flying ‘C’, red and black being two of the most popular colours. As the water warms up, lure size should be reduced and the speed of retrieve increased. Spinning upstream can be highly effective when the grilse are running. On some loughs, such as Melvin and Currane trolling is a favoured method early in the year. Usually two rods are used fishing different lures at different depths.

The main bait fishing techniques are shrimp/prawn and worming. Prawns and shrimps are effective baits and are usually fished on a float rig. When used properly, the trotted worm with or without a float is a skilful form of fishing as well as being very effective. The normal way to fish a worm is to use a bunch of three on a single hook; however a single worm can also produce results.

Boats enable the angler to gain access to water that may not be fishable from the bank. They also allow the angler to cover a greater area of water than when bank fishing. Boats can be hired at all the main angling centres.

Trolling is a favoured way of fishing the larger waters because so much ground may be covered in the course of a day and this method can be very effective for fishing salmon early in the season. Artificial or natural baits may be used. When fly fishing, drifting broadside down wind is the standard way to fish. There are rules of etiquette to follow when doing this, as well as points of safety, and hiring an angling guide or ghillie is recommended particularly on the larger bigger loughs if the angler is unfamiliar with the water.

An echo sounder is a useful aid on the larger loughs. The equipment is used primarily to ascertain depth, and to locate fish and the depth they are feeding at.

Please note the law requires all going afloat to wear a suitable lifejacket or buoyancy aid.