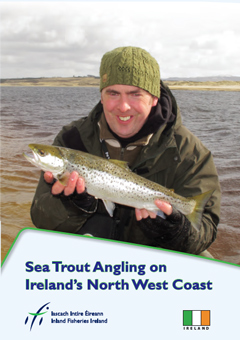 Sea trout, also known as white trout and finnock, spend a significant part of their lives in the sea but in Ireland are rarely fished for during this part of their life-cycle.

It is believed that sea trout migrate to sea due to a combination of biological, genetic and environmental factors. The main trigger for the sea going behaviour is in part due to the quality of feed found in their native waters. Particularly in acidic waters they choose to smoltify and migrate to sea to take advantage of the richer feeding available there, later returning as adults to spawn.

Sea trout ‘parr’ are indistinguishable from parr of resident brown trout. Sea trout parr remain in fresh water for 1 to 5 years, most migrating to sea after 2 or 3 years. Growth rate and so the age at which they enter the sea varies over their geographical range. Female parr are more likely to become smolts and migrate to sea than males.
Smoltification happens in the spring, typically when the fish reach 5 – 9 inches long. They turn silver with spotted flanks and yellow pectoral fins. The seaward migration taking place between April and June.

Sea trout often remain in the estuary associated with their natal river but may travel between bays as they seek out richer feeding grounds. The bulk of the smaller fish (3/4 – 1 ½ lbs) return to freshwater between June and August. Larger Sea trout (4 lb +) usually run in April and May of the following year. Spawning takes place in October / November. Sea trout can survive the rigours of spawning and migrate to sea to recover their condition and spawn again the following year.

Highly prized as a game fish, traditionally they are targeted when they return to freshwater. Elsewhere in Europe, particularly around the Orkneys and the Baltic coast they have always been fished for in the sea and in recent decades more anglers in Ireland are pursuing sea trout in the sea with exciting results. 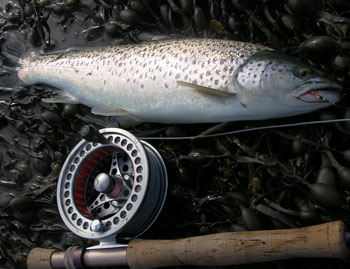 When fishing in the sea, first of all ensure your tackle is up to the job. Freshwater fly fishermen, just giving it ‘a go’ might be shocked at the speed and corrosive effect of sea water on standard freshwater tackle. If using freshwater tackle ensure it is washed thoroughly as soon as possible including all flies and lures.

For fly fishing a 9ft 6in rod rated AFTM 8 plus is advised. Probably an intermediate line will be of most useful in spring with a floating line for the rest of the year. Flies resembling shrimp and fish patterns are the most successful. As sea trout feed voraciously in the sea the size of fly is often more important than the tying. Patterns such as the Teal and Silver, Clouser minnows, Baltic Special, Medicine will all take fish. Bubble and fly is successfully used in some areas.

Spinning on light tackle can be productive with the most popular spinners being small Tobys, Krill, Mepps and Tasmanian Devils.
Sea trout are often taken as a by catch by bait anglers and sea trout will take a variety of well presented baits.

Sea trout remain a valuable resource and as such are protected whilst at sea. Anglers fishing for Sea trout in the sea must make themselves fully aware of the regulations.

The Wexford District is open for C and R from 17th of March until 16th of September and this therefore applies to the Wexford coastal district as well. Eg from Clammers Point to Clone strand

The Waterford District is open for C and R from 17th of March until 30th of September and this therefore applies to the Waterford coastal district as well. Eg: from Clammers Point to the point on the Western side of Whiting Bay.

IFI Ballyshannon. Anglers wishing to fish the Erne estuary for sea trout require to buy a €26 add-on special local licence (for the season). For the estuary of the Gweebarra Day Permits are available to fish and cost €10.

Though not as numerous in some of their traditional areas as in the past over all the stocks of Irish Sea trout are healthy. It would be hoped and encouraged that anglers catching sea trout in the sea will carry out ‘catch & release’. There is a season bag limit of 10 fish being either salmon or sea trout (over 40 cm) per angler in rivers above their Conservation Limits.

In addition there is

A little more on locations

Donegal – most of the small rivers that drain Donegal hold sea trout and will have sea trout in their estuaries. The Gweebarra and Erne estuaries are excellent spots to catch while the coastline around Ardara and the inlets around Rosguil are also worth exploring.

Sligo/Mayo – the area around Strandhill is known to hold sea trout but the ‘Jewel in the Crown’ of this region is the Moy estuary.

Galway – The whole Galway coastline was famous for the sea trout that it once supported. Though badly affected by salmon farms and sea lice Kilkieran Bay still is worth investigating with a fly rod as are all the other inlets along this rugged indented coast.

Clare – the South of Galway bay though not as prolific as the north of the bay still holds stocks of sea trout and Ballyvaghan and Kinvarra Bay are both worth fishing.

Cork/Kerry – With another heavily indented coastline the south west provides plenty of suitable habitat for sea trout to move around in. Both Tralee Bay and Inch Point have locations worth exploring for sea trout

Waterford – Not many reported catches of sea trout from the sea in the Southern Region but if you were a betting angler it would be worth exploring the Youghal estuary and Wexford harbour for sea trout. The Waterford District is open for C and R from 17th of March until 30th of September and this, therefore, applies to the Waterford coastal district as well. Eg: from Clammers Point to the point on the Western side of Whiting Bay.

Louth/Dublin/Wicklow/Wexford– an area that this year is of particular interest due to the Celtic Sea trout Programme. This coast has excellent stocks of Sea trout over the length of the coast. The estuary of the Boyne plus areas like the Malahide estuary hold stocks of sea trout.

The Wexford district is open for C and R from 17th of March until 16th of September and this therefore applies to the Wexford coastal district as well. Eg from Clammers point to Clone strand

Anglers and Fishermen – we need your help!! The Celtic Sea Trout Programme 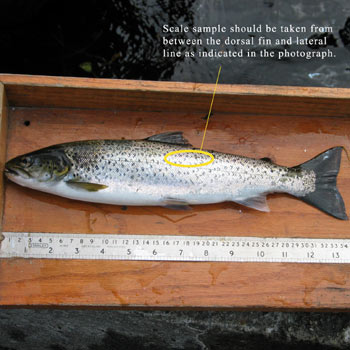 Scale sample should be taken from between the dorsal fin and lateral line as indicated in the photograph.

“We need Anglers to send in scales from each sea trout caught in the sea or any river between Strangford Lough in Northern Ireland to Timoleague, West Cork in the South” Dr Paddy Gargan Project Manager.

For more information about this sea trout project click here.