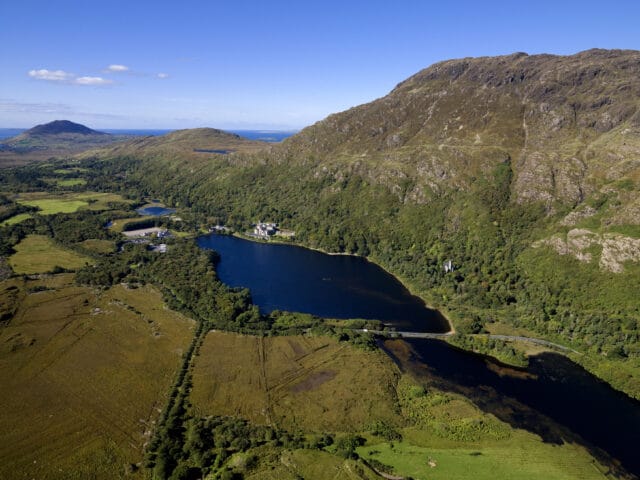 The quality of game angling in Ireland’s West is quite exceptional. Visitors fishing for salmon and trout in a natural, undisturbed habitat will enjoy a unique experience. The Galway Fishery on the River Corrib offers unrivalled fishing for salmon in the heart of bustling Galway City. Head west into Connemara for much wilder fare, with beautiful scenery and wildlife the backdrop to excellent salmon and sea trout fishing on loughs and rivers. Connemara has a myriad of loughs to fish, with several important spate rivers offering good salmon fishing as well.

A world-renowned fishery with prolific runs of salmon. The season runs from February to September but the best times are between May and August depending on water levels. Find out more about the Galway Fishery A complex system with many loughs and connecting rivers, draining the heart of the Twelve Bens mountain range. The main fisheries on the system are Ballynahinch Castle Fishery, comprising lake and river fishing at the lower end, and Lough Inagh and Derryclare Fishery, where many salmon and sea trout head straight for when they move upstream. Both offer superb fishing in beautiful surroundings, with luxury accommodation and cuisine available. Fishing is fly only on this system. The season runs from February to September but the best times are between May and September. Find out more about the Ballynahinch and Lough Inagh fisheries. 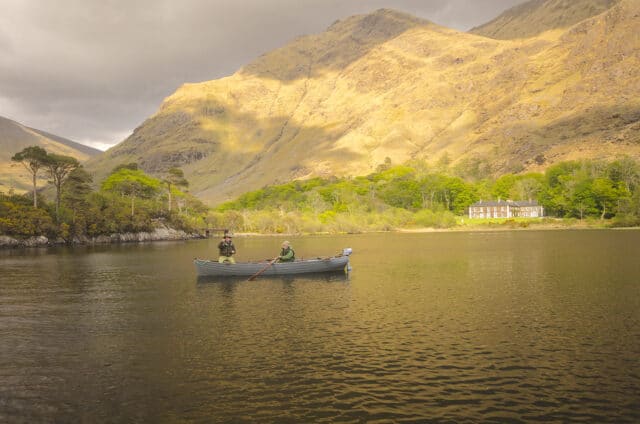 A short spaty river that drains three loughs, set in a stunningly scenic valley. Spring salmon fishing from early February, with grilse and sea trout throughout the summer. Both lough and river fishing on this private fishery, with beats rotated. The season runs from February to September but the best times are between May and August. Find out more about the the Delphi River 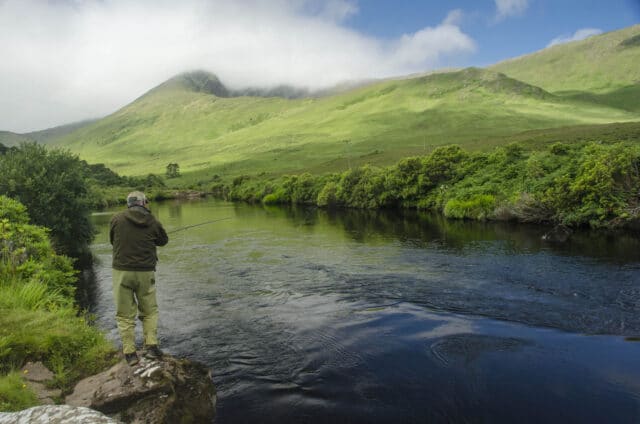 A spate river that rises and falls rapidly with rain, and can produce prolific sport during and following a flood. The season runs from March to September but the best times are between June and September. Find out more about the River Erriff

This system comprises three loughs, the largest at the head of the system, and the short gin-clear Dawros River that runs to the sea in Ballinakill Bay. Most of the fishery is controlled by Kylemore Abbey, with fishing on the top lake also controlled by Kylemore House. The season runs from March to September, but the best fishing is from June to September. Find out more about the Kylemore fishery here

It is illegal to kill any sea trout in all Galway, Connemara and Ballinakill rivers Fly fishing only. Season and best periods are from the 1st June to the 30th September. Find out more about the Costello & Fermoyle Fishery

Spate river. Fly fishing only. Season and best periods are from the 1st of June to the 30th September. Find out more about Ballynahinch and Lough Inagh

Tackle shops in the Western Region

Guides and Instructors in the Western Region