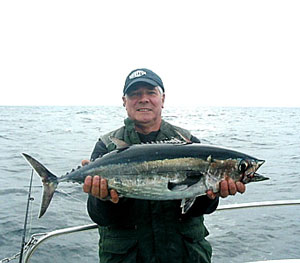 Longfin tuna (Thunnus alalunga), otherwise known as albacore, arrive off the Irish coast in late summer. Unlike bluefin tuna, they are found mainly in the south west, off West Cork and Kerry. Commercial fishing boats in the area have been catching them for years, along with occasional bluefin and swordfish. More recently, Derek Noble at Caherciveen has demonstrated the possibilities for the angler. This article describes an experimental trip out of Baltimore with a party of seven anglers on my own boat Rooster.

Compared to bluefin, albacore are small fish and not in any sense ‘big game’. Still, a tuna is a tuna, and longfin do have a couple of advantages over their larger brethren: (a) albacore fishing does not require expensive big-game tackle, and (b) in proportion to fishing time it offers a far greater chance of success than fishing for bluefin.

Unfortunately, albacore tend to keep well offshore. Now and then a few turn up close to the coast and are caught in salmon nets, but this is such an unpredictable event that an angler would have to be very lucky to be in the right place at the right time. Most of the fishing is at least 30 miles from land. Albacore are fast-swimming, migratory fish. Inevitably, finding them is going to be somewhat hit and miss. So it was more in hope than expectation that we left Baltimore on Rooster one morning in early September.

Much later we were beginning to reflect that, miles from land, one piece of sea looks very much like another. There were a few dolphins around and scattered flocks of gannets. At one point there had been an unusual disturbance in the water close to the bow, apparently caused by some medium-sized fish (definitely not dolphins) just below the surface. It was tempting to suppose that they might be tuna. We decided to start fishing. 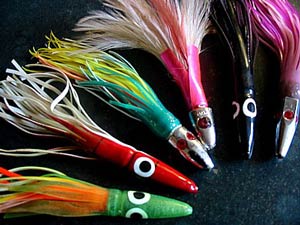 Rods were set up and outriggers deployed. Trolling seven assorted lures across the surface, we resumed our progress at a more leisurely six knots. In the wheelhouse, I barely had a moment to start doubting our chances of finding fish before a cry of ‘STOP THE BOAT’ went up at the stern. My first thought was that someone had caught one of the birds which had been taking a keen interest in the lures. But a glance at the rod tip revealed that, instead of going up into the sky, the line had disappeared down into the sea, unlike the rest of the lures which were still bouncing merrily across the top.

The albacore was a very small one, only about 5 lbs (2.27 kg), but its significance for us was huge. Buoyed up by the ease of catching our first Irish tuna, we set off again in high hopes of catching a second. And we did not have to wait long. In fact, we caught several up to about 15 lbs (6.8 kg) in fairly quick succession and lost one or two others.

Three of the first four tuna were caught by Tracey. There were those (Tracey mainly) who put it down to skill and those (the rest of the party) who thought it was more likely to be luck (or possibly pheromones). The issue was settled, however, when somebody else tried her pink-and-white lure. Over the day this one lure accounted for half the total catch. 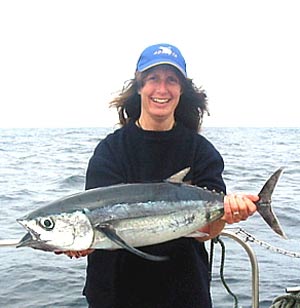 After the initial flurry we went without a strike for about 45 minutes. Thinking that we had lost the shoal, we turned round and hit fish immediately. We trolled in wide circles over the same patch of the sea and were rewarded with several more albacore, sometimes two at once. The skipper was ready to congratulate himself on the success of this tactic, but when we started steaming straight for home the shouts of ‘STRIKE’ kept coming at the same regular ten-minute intervals as before. In fact, the albacore kept coming until the moment we stopped fishing, suggesting it might be possible to catch them considerably less than 30 miles offshore.

Surface trolling is in some ways the direct opposite to other forms of angling. There is nothing stealthy about it. The boat ploughs across the sea, dragging the baits over the surface and making as much commotion as possible. The chances of a strike did appear to be improved by working the lure farther behind the boat. However, this may be because, other things being equal, the pursuing tuna will take the first bait they come to, rather than because they are shy of the boat. Letting the bait drop back merely means you are fishing unnecessarily far away.

It is tempting to think that if we had had more pink-and-white lures we would have caught more fish. On the other hand, there might just have been a more equal distribution round the boat of the tuna we did catch. Another day a different lure colour would probably have worked better. It might well depend on weather or sea conditions (this particular day was overcast with a slight chop). Whatever the explanation, when gutted the tuna contained nothing but small sprats, bearing no resemblance to any of the 7-inch (18 cm) squid-type lures that we were using.

We ended the day with twenty-one fish and had lost a few more. Ranging from 5 lbs (2.27 kg) to 15 lbs (6.8 kg), they were not big. Heavy tackle is not needed for fish like these, though it is probably wise to have plenty of line on the reel. Since fish of one size tend to shoal together, we might have been able to improve the average weight by extending our fishing over a wider area. However, when you are catching plenty of fish in one place it is hard to drag yourself away to another, at least until the novelty has worn off.

There are certainly bigger albacore out there. Alan Glanville’s recently established Irish record stands at 36.72 lbs (16.66 kg) for a fish caught in 2003, and they have been landed in the south west to at least 60 lbs (27 kg) commercially. The world record is 88 lbs (39.91 kg). If you have ever wondered what catching mackerel would be like if they grew to a respectable size, this is it!