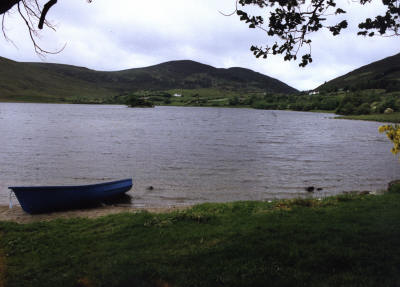 Lough Talt is a very picturesque lake of about 200 acres located in the foothills of the Ox mountains. The R294 Ballina – Tubbercurry road runs right along the northeast shoreline, making is easily accessible. Boats can be hired locally from the Lough Talt inn or can be launched from the jetty just of the road. It can also be fished from the shore, which is solid and accessible. The trout here range from ¼ – ¾ lbs with the occasional pounder. They are free rising and numerous, making it an ideal location for the young or inexperienced angler.

Easky Lough lies high in the Ox Mountains in Co. Sligo and is over 100 acres in area. The open season for salmon is from 1 February to 30 September; for seatrout, 1 February to 12 October; and for brown trout, from 15 February to 12 October. The lough lies along the road which runs across the mountain from Dromore West on the Sligo-Ballina road to Mullany’s Cross on the Cloonacool-Ballina road. There is no boat, but there is plenty of shore fishing and the safest place to fish is along the road on the east side. However, many consider that the west side gives by far the better fishing, though the walking is difficult and even dangerous in places. The brown trout are small – about three to the pound – but free-rishing, and the seatrout that get up there about August average ¾lb with some better fish. Some anglers claim that the lough holds a stock of large ferox trout, but none has ever been caught. What these anglers saw humping in the ripple were most likely salmon which enter the lough in high water and can be taken on fly or spinner at the mouth of the river which enters at the south-east corner.

The open season for salmon and seatrout is from 1 January to 30 September; for brown trout, from 1 March to 30 September. Gill is a large lough, nearly 6½ miles long from east to west and 2½ miles wide at its widest point. It lies about 3 miles east of Sligo and the R286 Dromahair-Sligo road runs close by the shore on the northern end and the R287 on the southern side. There is public access and parking at Inisfree, Sriff Bay, Aughamore and Hazelwood Bay. This lough holds brown trout and salmon. It gets a big run of spring salmon and anglers are out from opening day. Few loughs have a reputation for having salmon as the predominant angling species and this is one of them. Most of the fishing is done by trolling. February and March are regarded as good months and so also is May, but after that the salmon fishing is over for the season. Gill also holds a stock of good brown trout averaging 1lb. They tend to be dour and slow to take and anglers concentrate a lot of their trout fishing efforts on the mayfly season from mid-May to mid-June when the trout fishing can be good. Some of the best trout fishing areas are on the west side from Holywell to Church Island and around Aughamore Rock. Dapping the natural mayfly can be very productive and brings up some of the best trout. Spent gnat fishing is also available, as the female mayfly return to the water to lay her eggs. Bank fishing is possible, with permission, at some places on the north shore.
Permission
Sligo Anglers Fishery, c/o Ricky Fabozzi, Breeogue, Knocknahur, Sligo. Tel: (071) 9168404 and mobile 086 6062073; For permits contact Barton Smith, Sligo (Tel: +353 (0) 71 9142356)

Loughs Bo and Nasool are two spring fed lakes situated in the hills about 3 miles north of lough Arrow. Lough Bo is stocked annually with brown trout and lough Nasool is stocked with rainbow trout which do very well in the rich limestone water. Some fish overwinter successfully and offer excellent quality fishing in subsequent years. Permits are necessary in order to fish these lakes and these can be purchased from Ms.Mary McDonagh at the Public House immediately adjacent to both lakes – Tel: (071) 9165126

Permit details and information on Board managed fisheries [.doc, 27 KB]

Lough na  Leibe (or L. Labe) is another spring fed mountain lake situated between Ballymote and Castlebaldwin. It is also stocked with rainbows and is set in a beautiful, tranquil location. Details on angling conditions can be found at www.ballymoteangling.com

A permit is available through Ballymote and District Angling Club, and can be aquired at:

The Unshin River which flows northward out of Lough Arrow, is a clear limestone river which holds some excellent trout. It offers some good fishing around the Collooney and Lisconny Bridge area. It is largely deep and slow flowing and is dependant on hatches of mayfly to bring the trout up. It is fished in April and May but weeds up in the summer months.