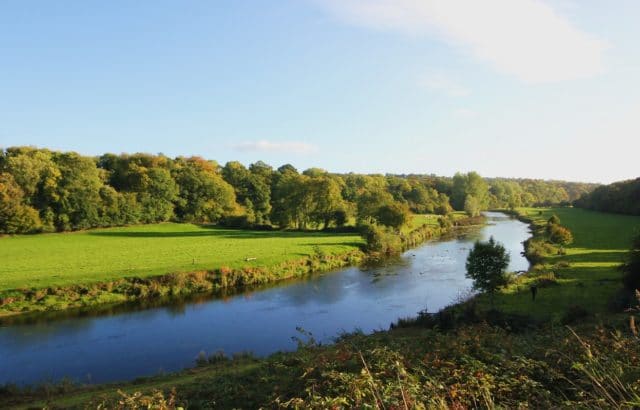 Some rivers will have areas open to all legitimate methods, however fly fishing is usually the preferred option. Fishing with bait can be particularly good in either very low or high water. The trotted worm can be deadly when a river is ‘thinning down’ after a flood. Spinning can be effective at all times though after a flood is particularly good time.

For fly fishing, Irish rivers can sub divided into acidic and limestone. The limestone rivers generally fish best to upstream dry fly or nymph. On the occasions when large numbers of fish are rising, the angler is spoilt for choice. Acidic streams tend to favour wet fly fishing – usually downstream and across. Over the last few seasons Czech nymphing has become more popular and is an effective method of taking fish on all Irish rivers.

The evening rise is particularly important for the angler from the end of June. The daytime rises usually diminish during the summer months but there is compensation in the hours of intensive sport from early evening to 11pm or beyond. The rise begins with trout moving to small fly such as pale wateries from about 6pm; then the blue winged olive appears and can bring up heavy fish, which feed into dusk.

Finally the sedge species hatch and the trout rise to these until after midnight in July and onward. Very good fish may be taken during that last phase of the evening rise.

On the majority of loughs all legitimate angling methods are allowed but fly fishing is usually the method employed. It is important to check what methods are permitted on individual fisheries. It must be noted that trolling is a method that accounts for a great number of large fish from Irish loughs every year.

As with the rivers the geology underlying the loughs will affect its productivity and so influence the invertebrate life found. Trout in the loughs feed hard on hog louse and shrimp early in the year but will rise for the early hatches of duck fly. The Irish loughs are famous for their mayfly hatches that start as early as April and go through to July. Warm summer evenings herald the arrival of sedges. Toward the end of the season the trout may be given a final feast of daddy long legs and olives that can produce excellent top of the water sport. Certain trout can get totally preoccupied with shoals of fry.

These lakes are distinctive to Ireland. They tend to be from 2,000 to 40,000 acres (800–16,000 ha) in size. They are generally shallow and hold mixed stocks of fish. Underlain by limestone, they are rich in food and produce trout of a large average size. Early fishing on the loughs is dominated by the chironomids (duckfly), which hatch from March onwards. Duckfly hatches peak in late March, early April, when lake olives also begin to appear. May is one of the best months, dominated by the appearance of the mayfly. Good fishing continues into June with evening hatches of sedge augmenting mayfly and other hatches, which persist into this month. By July daytime hatches begin to diminish and shoals of fry distract the trout. However, evening fishing with sedge patterns reaches a peak in this month and there is a tradition of fishing into the night on Lough Owel in Co. Westmeath when the big sedge the ‘Green Peter’ hatches. Daytime activity increases after the middle of August and into September; in these months the traditional dapping of grasshoppers and daddy long legs flies brings up very big trout
especially on Loughs Corrib and Carra.

Fishing on a number of loughs, such as Lough Ennell near Mullingar, Co. Westmeath in the midlands continues into early October and although the hatches are sparse the fish can be very active.

To get the best of the fishing on the loughs one needs a boat to cover them properly and the services of an angling guide are invaluable. For example Lough Corrib is 27 miles long and 6.3 miles wide at its widest point, with a surface area of some 70 sq miles. It would take several life times to fully familiarise yourself with this area of water. Guides and boat hire are available on all the major trout waters.

Good water on Laune last week but no salmon reported yet