Fishing in Ireland – Catch the unexpected
Home Sea angling reports A struggle ,a drama and a bass for Cork angler 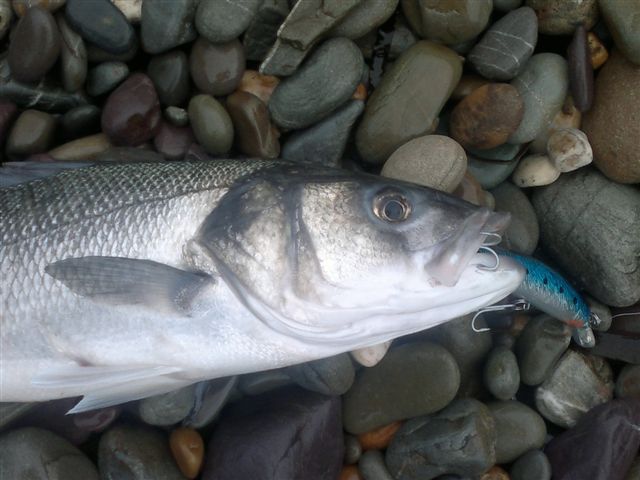 So…the weather for Friday looked bad…here we go again….ok…that’s it a change of plan! Up at 4 am and a quick coffee and away down the main road, which was dreary. Along the back roads and noting the huge amount of rain which was still on them I thought this was going to be another waste of time. Got to my chosen mark to find the water like cocoa. A few casts and off to mark two which was inside the harbour. Lovely clean water with patches of weed. Fished for a few hours here, but no luck, it just was not happening. Realised I had left the lure box back at the car and had no spare, and yes it happened …crack! Rigged a bit of stick on the line and managed to pull it in range of the tip of my rod…lucky lure?

Off to mark three…outside the harbour, to find milky water but quite fishable, and a ramble began, casting down the gully’s as I went. Half asleep now I wound the pilchard lure in and it all stopped…then shaking… I realised I had my first Bass of the season on. Played the fish for a bit and got it close to the edge of a rock pool, when it threw the hook just as a wave washed it over the lip into the rock pool! I dropped the rod and dived in, chasing the fish around on my knees…grabbed it! Yes! Phone cam to get out…shite it’s away again…it was like a mad mud wrestle! Tried to grab/photograph the fish and it was going mental in the pool! Then another wave came in, filled the pool and she was gone. I’m counting that! (Did I get a pic? Turns out I got a fuzzy one)

Stood up and realised my shorts had popped a button or something and were slipping down hanging on by the wader gusset! Drama! Anyway moved off along the mark after a few more casts came to a lovely gully. First cast and fish on…no drama here nice and easy on to the pebbles. Barb less hooks out like a dream and back it goes,
Fished on and another hit which resulted with me holding the Bass, the lure floating away snapped off, and the rod getting washed into the gully….sorted it all out using the length of the rod to snag the lure back (lucky lure for sure!) 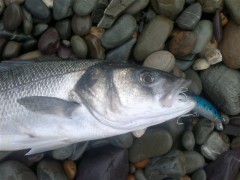 Dropped another fish soon after hooking up, and looked at the time I had to leave for Clare’s school concert! But walking back flicking the lure here and there I winkled out a small one…  I am sure I could have had more if I stayed… but who knows! Anyway finally…The Monkey is off my back! 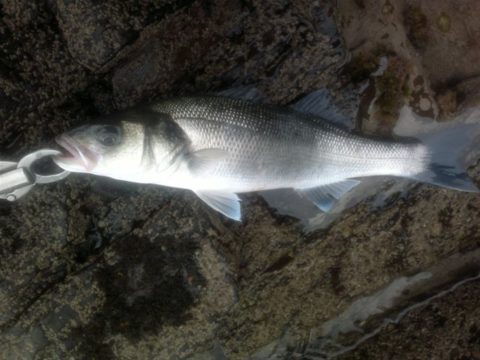