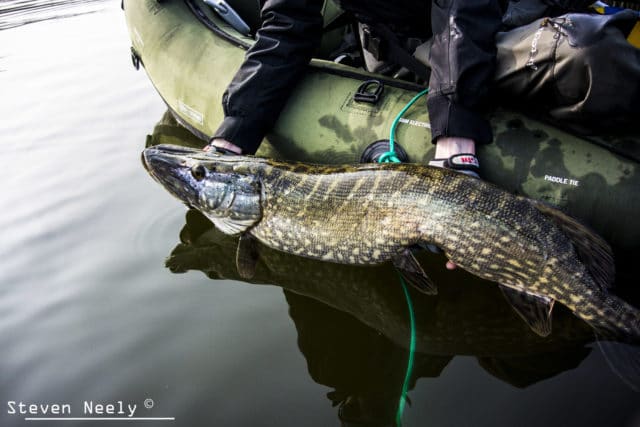 Pike may be fished at all times of the year and fishing may depend on prevailing weather, water levels, barometric pressure and temperature. The influence of the Irish climate, as well as the habits of the pike, also have to be taken into account.

Irish rivers and loughs are subject to seasonal rhythms of high and low water. Winter floods will put some rivers out of condition from time to time, and affect access to the loughs.

The high winds of spring and autumn can render boat fishing on the bigger loughs unsafe for short periods. However, the pike fisherman in Ireland will always find sheltered waters available when others are affected by floods or gales.

When water levels are high and some fisheries are unfishable, rivers like the Barrow can be the place to fish. The River Barrow has a network of weirs and there are many navigable side canal channels and in flood time most of the coarse fish move into these backwaters accompanied by the very large pike. Indeed over the years, most of the big specimen pike have been captured in the canal sections during the winter period.

Hot summer temperatures are probably the only time of year when pike are not active during the daytime period.

Irish pike spawn between February and April, usually in the shallow margins of rivers and lakes. Many of the bigger pike taken are captured just before the spawning period. Specimen hunters are advised to locate potential spawning areas of lakes and rivers to maximise the chances of taking a fish of a lifetime.

The behaviour of pike depends on the behaviour of the prey or fodder species. Big-water pike may be more dependent on shoals of fish like bream and roach which move around, and they tend to follow these shoals. Anglers studying the movements of fodder fish are more likely to meet with success and the pike angler using a boat can use an echo sounder to locate these shoals.

The time of day can also be important on certain waters with regard to the taking behaviour of bigger fish. The period around dawn can be productive, as can the final hours of daylight. In the colder months, some pike will only be active and feed around midday, as this is generally when the highest water temperatures occur. This behaviour may vary from different waters and size of fishery during the year. Check with a local tackle shop or angling guide for the best taking times on the fisheries you are hoping to catch a big pike.