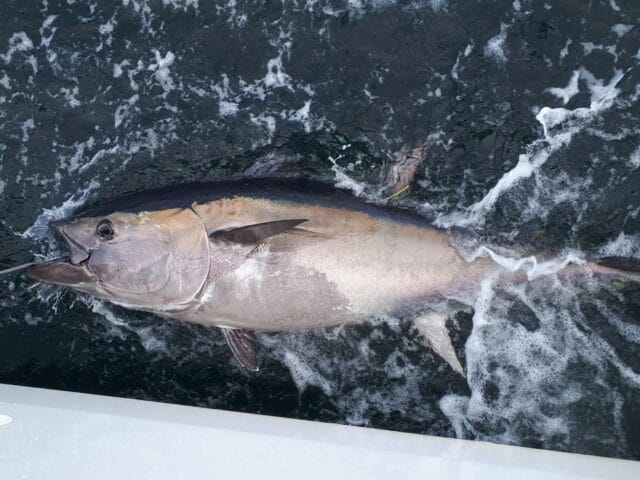 CONTROL OF SEA ANGLING METHODS FOR CERTAIN SPECIES OF FISH – BYE-LAW NO. 981 of 2020

This bye-law provides for the prohibition of surface trolling from any vessel used for sea angling, targeting or catching any species of Tuna, Shark or Billfish. The Bye-law also provides for the prohibition of having on board any vessel, gear or equipment capable of use for trolling surface fishing lines for any species of fish.

Anglers wishing to engage in this fishery must only do so on a sea angling vessel specifically authorised to participate in the pilot programme.  Any person engaging in this fishery on any vessel which is not appropriately authorised will be in breach of the Sea-Fisheries and Maritime Jurisdiction (Bluefin Tuna) Regulations

A full list of authorised skippers (2021 only) can be found below:

The Realisation of a Dream – Big Game Fishing in Ireland

For a long time, Ireland has been recognised for its marine sport fishing. The vast variety and quality of our angling has given the country a reputation of which we are justly proud. Sea fish captures range from the humble dab through to blue shark and the mighty common skate. However the large ocean going big game fish remained strangely absent from anglers’ catches despite almost annual stories of lines being torn from reels and terminal tackle being smashed by unseen giants of the deep.

For over 30 years, Kevin Linnane, former Sea Angling Officer and Angling Manager of the CFB, had a vision that one day the big game fish of the American East Coast would fall to rod and line on this side of the Atlantic Ocean. Despite many attempts, including two visits to the Porcupine Bank,100 miles off the west coast, no big game fish showed.

In the early 1980s hopes were boosted by reports from the commercial fleet. Several blue fin tuna, (Thunnus thynnus), the hardest fighting game fish of them all, were landed at Fenit, Co. Kerry. Pair trawlers working on the herring grounds at the mouth of the Shannon Estuary had taken these fish, some of which ran to over 1,000 lb. (454 kg).

By the mid 1980s, super trawlers working out of the port of Killybegs, Co. Donegal, were mid-water trawling the local inshore waters when blue fin tuna began to show up in catches of mackerel and scad. Again giants of more than 1,000 lb. were caught. Obviously the tuna were feeding amongst the shoal fish and the very real possibility of catching big game fish in Ireland began to materialise.

In the mean time the quality and number of purpose built angling charter boats increased all around the Irish coast. Fishing took place in deeper and deeper waters and soon numerous reports filtered through of surface sightings of “fast moving fish”. It was thought that many of these sightings were of Albacore, (Thunnus alalunga). Charter boat skippers were not the only people to make sightings. Increasingly shoals of blue fin tuna were reported by fishery patrol vessels from the Northern Regional Fisheries Board, particularly in the vicinity of Rathlin O’Beirne Island on the north-western corner of Donegal Bay. Furthermore some of these sightings were made in mid-summer dispelling the theory that blue-fin tuna were a seasonal visitor only to be seen in the autumn months of September and October. Indeed some fish sighted were observed less than 500 m from the shore!

Blue fin tuna catches had become quite common on the west coast by the mid 1990’s, but still no fish had fallen to rod and line. It was abundantly obvious that these great fish may be available to the big game fisherman, but nobody was prepared to invest the quite considerable amounts of money required to gear up an angling vessel to join in the hunt.

When in 1997 illness caused Kevin Linnane to retire from the CFB, it began to look as if his dream of big game angling in Ireland would never be realised.