Summer fishing for wrasse, pollack and bass on the Dingle Peninsula offers the fisherman some of angling’s most exciting sport. No heavy rods; no big heavy tackle box stuffed with all the usual paraphernalia normally associated with shore fishing; and not a rod-rest in sight. To my mind an idyllic way of fishing, and for three of the most enjoyable species that abound here from late spring to well into autumn.

However, this is not to say that they are always that easy to catch. Even on the Dingle Peninsula – sometimes, they can be downright exasperating! But with care and attention to detail, the right place at the right time and, above all, perseverance there’s a very good chance they can be enticed to the hook – and quite often fish bigger than would otherwise normally be caught. Three basic elements to any really successful trip. 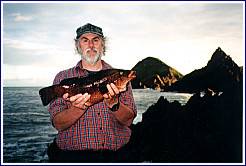 Wrasse are fairly common and pretty well plentiful from most rock marks. To catch good wrasse though, and in this I mean fish consistently averaging around 4 lbs, definitely needs a good bit of thought. A flood tide during daylight (because wrasse don’t feed at night), a nice bit of swell (white water) around the base of the rocks without it being too dangerous to fish and, if using hard-backed crabs (my favourite bait for wrasse), making sure they are alive and kicking. Float fishing is my preferred method for wrasse. It allows the bait to be kept off the bottom, gives that extra nanosecond of room in order to stop the dive (sometimes!) and, by adjusting the depth, allows the bait to be presented – and kept – to where the fish are feeding. It also has the advantage of keeping tackle losses to a minimum. When they go off the feed – or with no luck for a while – then move.

Pollack are a much more versatile species and one that a lot of people decry for their lack of fight. Don’t you believe it though, for on the right kind of tackle they can be tremendous fun. Either spinning with a lure or frozen sandeel, using a strip of mackerel as bait under a float or, most exciting of all methods: on the fly. When fly-fishing (my favourite method), use a floating line with a long sinking tip and allow the fly time to get down – sometimes 30 seconds, according the depth. Strip in a couple of feet at a time, resting between to allow the fly to come in sink and draw. Best on a dark day, or at dusk, with a little bit of movement in the water: if they don’t come easily, then change to a different method. 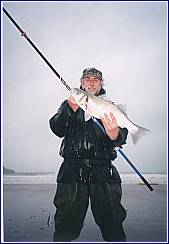 Bass are an all-year-round species on the Dingle Peninsula. Surf fishing, and with bait, during winter: right the way through from October to the start of the close season on the 15th May, whilst during the summer months best caught on artificial plugs and flies. For which type of fishing the ground is of paramount importance. Low rocks, or rough ground, where the bass are nosing in in search of food as the tide floods from low water. Boulders, around which they can lay in ambush. Sandy beaches, especially at dawn or dusk, when sandeels are exiting the sand. Different plugs for each type of ground and all fished at very close range. The same story, too, with a fly. Either an intermediate line, to fish the fly sub surface, or a floating line for use over those very shallow areas – for which a popping fly is similarly recommended. Key to a successful days plugging/fly-fishing for bass: keep on fishing different marks to find the fish – and perseverance.

Let’s face it, any day fishing the Dingle is usually enjoyable – the trick is to turn an enjoyable day’s fishing into a really GREAT DAY!