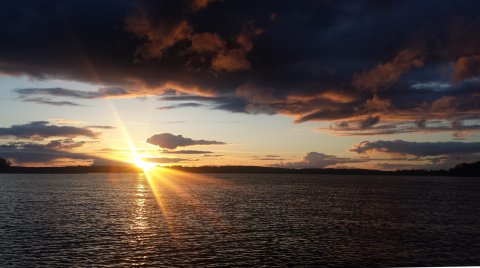 The weather has improved for both fish and angler in the last week, with an increase in rainfall in many parts and a drop in temperatures in all parts. Drought conditions still prevail for most of the country and rivers and lakes remain low in most areas. Some spate rivers did see temporary improvements with the rain and both salmon and sea trout have been running a number of rivers.

Water levels did rise and water temperatures decreased on the Moy following heavy showers on Thursday and Friday, this led to 266 salmon being reported caught in the following days. The Erriff reopened again after being closed for fish welfare reasons for a little over 3 weeks with 20 salmon having been landed up to Thursday morning. Costelloe and Fermoyle saw a big increase in catches of sea trout following the break in the weather; indeed the sea-trout are reportedly returning in better numbers this year on a number of rivers which is great to see.

On the trout front, loughs Corrib and Mask hosted a successful Cast A Line For Autism charity event where 52 anglers fished, the Irish Guide Dogs and charities related to children with special needs both benefitting from the moneys raised. Fishing has improved markedly on Corrib with fish up to ten pounds being caught, wet and dry mayfly and sedge patterns are doing the damage here. On the Nore, while water levels are at a record low the trout are still feeding in the cooler periods with one group of visitors landing 35 trout.

Coarse anglers have reported good fishing on the canals and the Shannon and Erne systems. The Killeshandra Festival was won by Wayne Fuller with a total weight of nearly 65kg for the week. The Grand Canal has been fishing well for all species with all methods producing the goods. The Shannon near Banagher has had some good sized roach falling to feeder fished with maggots.

On the tide there have been reports of some good bass fishing along the south coast with plenty of schoolies appearing which is a good sign for the future. Mackerel are beginning to turn up all around the coast with some good catches reported in the Waterford area. On the west coast charter skippers are reporting great catches of reef fish in the last number of weeks with numbers of blue shark also increasing.

The weather for the bank holiday weekend will see scattered outbreaks of rain on Friday with occasional sunshine as the day progresses, temperatures up to 24C. Saturday will stay mainly dry and slightly cooler with light breezes and a mixture of cloud and sun while Sunday will see the highest temperatures of up to 25C in Leinster and Munster; the west and north west will remain cloudier through the day. Some rain will develop on Sunday night in northern areas. Monday will see rain and drizzle in the north and west while eastern and southern counties will be generally dry with temperatures of 17C to 22C in light breezes.