Salmon Watch Ireland (SWIRL) is a not for profit, membership-based organisation dedicated to the restoration of wild salmon numbers in Ireland. SWIRL organises an annual conference to focus attention on an item of importance to salmon, and to raise money for their objectives. This year’s conference will take place online on Saturday, November 6th, between 09.30hrs and 13.00hrs and you can register for a ticket here.

In 2021, the fish-passage and hydro-morphology impacts of Ardnacrusha are beginning to be properly addressed after a century, so it is timely to review the effects of river barriers in general and see what can and is being done to mitigate those effects.

Our rivers are under threat as never before from municipal, domestic, agricultural and forestry activity. Biodiversity, insect numbers, and fish numbers are at an all-time low, and our rivers must endure chemical, morphological, and sediment-induced damage, which further decreases biodiversity and diminishes out natural heritage.

Climate change also is having an effect, not just by increasing the temperature of water, but by causing an ill-advised rush in some countries to install barriers for small scale hydro-powered generators, in the mistaken belief that these are in some way ecologically friendly and have no impact on nature.

Such activity would repeat the worst mistakes of the 19th and early 20th centuries, and it is timely to educate against such initiatives. On the positive side, the Ardnacrusha project has the potential to help restore the Shannon River to one of the great salmon rivers of the world.

SWIRL has always demanded a concerted program for the removal of all redundant river barriers and the optimization of migratory fish passage on all other major barriers.

SWIRL is committed to addressing the removal of man-made barriers to migration for Atlantic salmon and sea trout in rivers and supports designs that facilitate all fish migration. A properly functioning ecosystem is necessary to facilitate the optimum production of salmonid juveniles in freshwater.

This conference will improve understanding of the complex issues surrounding fish migration and how best to facilitate the necessary improvements.

Alan Cullagh will be presenting on behalf of Inland Fisheries Ireland and will discuss some of the practical issues involved in the removal and mitigation of river barriers. Inland Fisheries Ireland staff have carried out a significant amount of work to date under the National Barrier Programme (NBP). The NBP is funded by the Department of Housing, Local Government and Heritage (DHLGH) to deliver a national inventory of barriers to fish migration on rivers for the purpose of managing their environmental impacts.

Structures in rivers (including weirs, culverts, sluices and dams) have the capacity to impede fish passage, fragment and damage river habitat and impact on natural river processes. These structures may also add a significant hydromorphological pressure to river water bodies and have an interactive effect with other pressures, degrading a water body’s Water Framework Directive status. 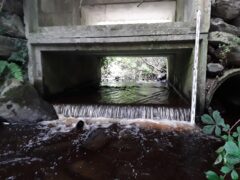 Inland Fisheries Ireland’s National Barriers database contains 73,088 potential barrier entries, to date IFI has surveyed 32.5% of these structures, identifying 4,367 barriers to fish passage. Of these barriers to fish passage ~3,000 are culverts and ~1,000 are weirs, the rest are fords, sluices and natural waterfalls. Large weirs can significantly impact migratory fish populations, but the impact of culverts, mostly in headwater spawning streams can have just as significant an impact when considered cumulatively – i.e. a very large number of smaller scale negative impacts on a river system can have just as considerable a negative effect when taken as a whole.

9.40-10.00 The potential impact of low-head barriers on aquatic biota in Irish rivers – some insights from the Reconnect project. Mary Kelly-Quinn (UCD)

10.15-10.30 Some thoughts on interactions between Barriers and Atlantic Salmon. Phil McGinnity (UCC)

12.20– 12.40 How to Organize and Fund a Barrier Remediation Project. Bob Seward (Angling Council of Ireland)