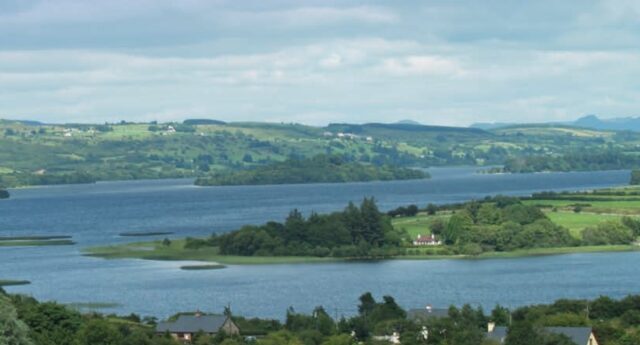 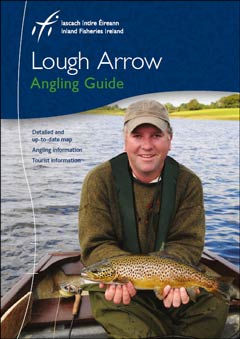 Arrow is one of the great Irish trout fishing loughs where the trout average 1½lb and fish to 6lb and 7lb are taken on fly annually. It is 4 miles north-west of Boyle, with Ballymote 6 miles and Ballyfarnan 3 miles away. It is a limestone lough, incredibly rich and, while it has some feeder streams, it is mainly spring-fed. The scarcity of spawning and nursery areas is a limiting factor in trout production. It is no longer stocked and anglers should not expect big catches. What you get is quality trout, but fewer of them. There is public access at Brick Pier on the eastern shore, Ballinafad Pier on the southern shore and Rinnbawn Pier on the western shore. There are also various private access points, some of which may be used with the owner’s permission.

The duckfly hatches in late March and early April and the favoured fly patterns at that time are Blae Sooty Olive, Fiery Brown, Bibio, Red Arrow, Invicta, Connemara Black with Jungle Cock and Heckham & Red. Next come the lake olives from mid-April to mid-May and useful patterns then are Olive Bumble, Green Olive, Golden Olive, Invicta and Greenwell’s Glory.

May and June see not only the mayfly hatch but good buzzer fishing at night and here red and olive pupa patterns are popular, together with dry buzzer imitations. The mayfly season generally begins about 17 May and lasts until the second week of June. Arrow has its own Mayfly pattern and the Invicta, Teal and Yellow and Golden Olive work well at this time. Many prefer to dap natural mayflies, collected along the shore and on the islands. The spent gnat fishing is one of Arrow’s really great attractions. At this time, murroughs hatch in large numbers after dark and this is one very exciting way of getting a big trout, but it calls for great skill and experience.

This lough gets a fall of soldier beetles in July. Arrow is one of the few loughs that still get a good hatch of Green Peter and big hatches of smaller sedges. The season for this is late July and early August, when the Peter hatches at dusk. Late August and September is a good time for drifting tradional style with wet fly and favourite patterns at this time are Green Peter, Bibio, Invicta and Teal & Yellow. There is a 12-inch size limit.

Arrow has such a variety fo fishing that I think I should take the prospective visitor around the lough and explain the kind of fishing that can be expected as we go along. We will start at Brick Bay and travel in a clockwise direction. Brick Bay has a good duckfly hatch; the mayfly hatches early here; there is good buzzer fishing at night and the murrough hatches down at the narrow neck out of the bay. Fishing can be slow along the Annaghgowan shore except for dapping in the mayfly season. McCormack’s Bay is likely to produce a fish at any season. Andersna Bay has duckfly, olives and mayfly, and can give good spent-gnat fishing in suitable conditions. Drumdoe Bay gets a hatch of olives and, in mayfly time, this bay and across in front of Drumdoe House fishes best to the dap. The same is true of Little Douris, Big Douris and Flanagan’s Bay, which also has a good duckfly hatch.

Jack’s Bay has good duckfly and mayfly hatches and, indeed, fishes well right through the season. McDonald’s Shore fishes well to the dap in mayfly time. Ballinafad Bay had good duckfly and mayfly hatches and can fish well late in the season. Aughanagh Point is very shallow for at least 100 yards off shore. It has good murrough fishing in May-June and Green Peter fishing in July-August. Aughanagh Shore is not much fished and fish are scarce there but Ringbawn Bay has a great hatch of duckfly and olives and fishes well late in the season.

There is an excellent mayfly hatch around Cranewood Point and it offers good buzzer fishing. From Hollybrook Harbour to Laundry Bay, there is a good duckfly hatch, buzzer in May-June, and a very good mayfly hatch. There is a good hatch of olives in Laundry Bay. The area from Ballantine’s Point out to Lyttle’s Island and up to The Thumbs gets a very good duckfly hatch, an excellent mayfly hatch and good hatches of murroughs, olives and buzzers. Lyttle’s Island gets a great hatch of mayfly all around and there is a duckfly hatch in Horse Shoe Bay, which is also a noted area for spent-gnat fishing. Brickeen Bay, Annacur Bay, the mouth of the river and Kelly’s Bay get hatches of all the fly species found on the lough and always hold a big stock of trout. There is a good drift along the Pumphouse shore and into Pol Na Perches in a south-east wind in mayfly time. Ballindoon Bay always fishes well and is famous for its murrough and Green Peter fishing.

The fishing is free.

There is a 12-inch size limit and a bag limit of four trout.