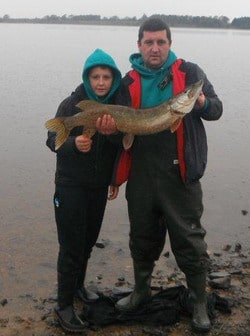 30/11/12: A blue sky, light breeze and a flat calm Poulaphouca Reservoir welcomed 81 anglers at 11.00 am last Sunday. They were there, spread along the bank between Baltyboys Bridge and Tulfarris golf course, the competition stretch for the Newbridge and District Angling Association’s annual open pike competition.

This normally prolific section encompasses the course of the River Liffey before it was dammed at Poulaphouca.

Club member Paddy Ashe from Finglas accompanied by his 12-year-old son Nathan won out on the day. The 32-year-old security officer connected with his prizewinning fish at 1.30 pm on a popped up rainbow trout.

Paddy, along with some others, fishing near the golf course described the pike as “very finicky biters”. “They were lifting the baits but dropping them as quickly” he said. Then the freezing rain and wind started never letting up for the rest of the day.

Leinster Provincial Council IFSA stages its final league competition of the year on Sunday 9 December. The Orphan Girl Pub, Ballymoney, Co Wexford is the headquarters for this open to all pre-Christmas event. Soup and sandwiches are promised to all competitors afterwards at the prize ceremony.

Weather permitting local beaches will be used as venues and all baits are allowed.