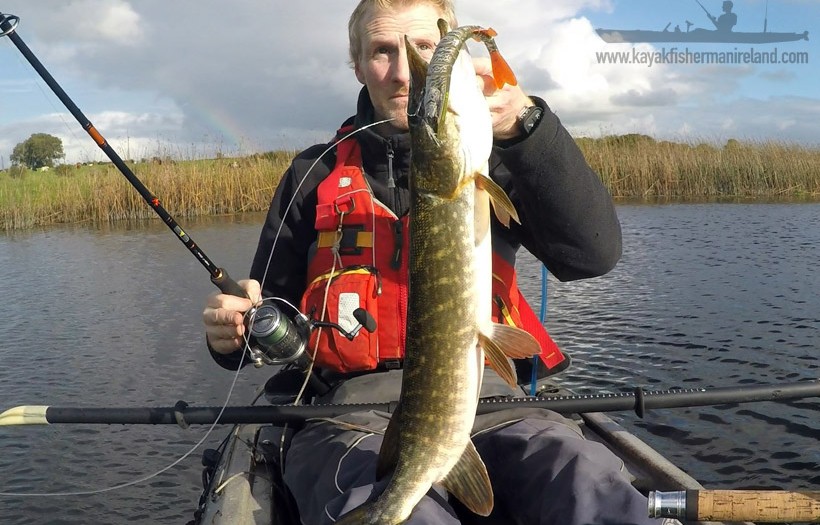 Dressed and ready for battle Gary Robinson of Kayak Fisherman Ireland ploughs through the weeds and against the current in search of esox.  He reports: 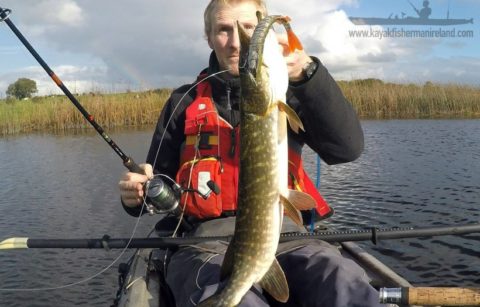 Anglers have to be the eternal optimists, I can’t think of any other reason for subjecting ourselves to deplorable weather and temperatures in the hopes of finding a monster.

Always hopeful when you see a rainbow I didn’t find any monsters today but I found good fun in spades and a few reasonable pike thrown into the mix. Launching my little plastic boat onto the river, I started to make my way upstream. Not easy work but when I decide to come home I get pushed back by the current!

Working my way against the current I wanted to troll lures behind me but the excessive plant growth and shallow water prevented me doing so in a lot of places. Instead I resorted to looking for areas that I thought pike might be lying up in and casting lures into them. The pike were in a strange mood today. No matter what lures I threw at them, they were only interested in one – the Biwaa Swim Pike. Again! For whatever reason every other lure I tried today failed and I tried some very reliable lures! They just were not interested.
First fish came about 2kms into the upstream paddle. I cast to a slacker looking area of water and the lure was hammered on the second cast. After a brief tussle and a quick unhooking the pike was allowed to go on it’s way. It darted into the reeds, probably sulking after being tricked by a lump of plastic and metal. Further upstream I pushed, seeking out more fish and it wasn’t long before I found the next one in the eddy created by a partly submerged tree. Another exciting tussle ensued.

The afternoon was very pleasant despite the warnings of the tail end of a hurricane that was allegedly looking to pick a fight with us. It never showed much to my relief and whatever the combination of the weather and one particular lure was conjuring, one thing was for sure – I was hammering pike. I had a fantastic session with almost a dozen fish and although none of them were huge they were a better average size than I have enjoyed on the previous two outings. I certainly hope that this upwards trend continues. 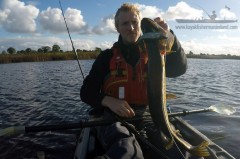 I headed for home as the sun started to drop and reflected on another great afternoon on the water. Anglers, the eternal optimists. It’s easy to be optimistic following an afternoon of sport and scenery like that one. The next 20lber has to be just around the corner! I leave you with a short video of a couple of the better fish from the session.