Rookie Bass Angler Steven Neely was far from a rookie this week as he tackled an energetic and acrobatic pike near Fermanagh in the mid to high doubles.  He reports:

It seems like an eternity since we were out in the kayaks chasing pike – the plan for the weekend was to go and fish from the shore but with pretty poor reports, bright skies and the pressure through the roof we thought maybe getting a float would give us the edge. To be honest we weren’t very hopeful given the fishing trends in the area over the past few weeks and like I said the weather was just shocking, in terms of predator fishing but we still geared up and headed off – if nothing else it would be nice just to get out again and go for an explore.

When we arrived the lake was like a mill pond with a few small roach skittering on the surface …  and then a few pike stared to smash and swirl in the margins – things were looking promising!

We set off to a few spots which we knew held fish but nothing was shifting for the lures.

It wasn’t until Gina tried the small perch lures and straight away she nailed some jacks and a few perch … was this one of those days when they won’t look at the big stuff?

My father had opted for a different approach unleashing the fly rod. He seemed to be nailing a few round the edges so it was a bit of a head scratcher as to what sort of mood the fish were in.

After hitting a few smaller fish we moved over to try some drop offs – our theory being that the fish might be lying up in the deeper water. A few casts with the Nitro shad 150 soon confirmed the theory. Gina hit a few better fish and things were looking up.

After exploring the drop off we moved over to the deepest part of the lake which runs like a trench for a few hundred meters.

I wasn’t geared up for throwing the big stuff but I decided to tentatively have a few casts with my Illex Dexter Eel 210 which was rigged with a screw in 20g head and two stinger. When I say cast, it was more like a lob due to the weight of the lure and the light rating on my rod. I let the lure sink to the bottom and then began a very slow retrieve.

On the third retrieve I got one almighty heavy knock and before I could process what was going on the rod lurched and doubled over pulling the tip under the water – I was in and it wasn’t a jack!

I really wasn’t prepared at all for a fish this size on my set up … truth me told I was bricking it a little!

It came up to the surface relatively easily and then all hell broke loose – It decided to propell itself into the air and nearly came between us in the kayak … clean underwear was almost needed but then it  It thrashed on the surface before deciding to surge back down to the bottom where she hang deep and made sure I knew she was still there with the odd powerful shake of the head.

Eventually she was ready and Gina slipped the net under it while I just sat there in shock.

At this stage we were both soaked from the thrashing and jumping during the heat of battle – we decided to paddle the short distance to shore where we could safely handle, unhook and release the fish.

Whilst I went for the camera Gina unhooked it and with a few quick snaps she was ready for release. 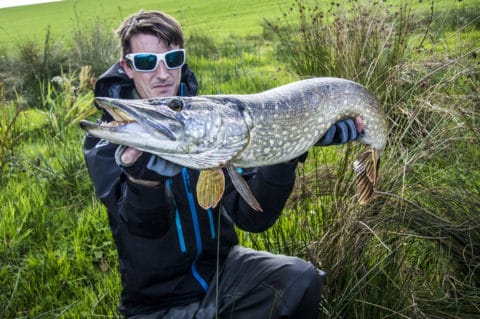 With no scales or tape we have no real way of putting an accurate weight to the fish … but it was a good mid to high double figure and a little bigger than my previous biggest fish.

It looked like a crocodile as it made its way back through the lilly pads and into the murky water – what a fish and to nail it on my 25g lure rod was something else. Not something I advocate doing but it just goes to show you what your gear can do sometimes.

We fished on with the smaller Dexter 150 shads for the rest of the day and totaled over 20 pike between the three of us.

So all in all … not a bad outcome in what looked like relatively poor conditions.