Angling guide Christopher Defillion reports from his guiding trips to the Boyne earlier this month:

The Boyne is on fire!

In the early part of the month we had some very good rain, you could say a proper ‘Irish summer’ and the daily showers helped to keep the water levels up and the fresh salmon running… There was plenty of movement also from the coloured fish but of course they dont give themselves up as easy as their fresh silver brothers. My first customers of the month came from Ireland and they were hoping to catch some fresh fish on the fly. We had plenty of action with many hooked and many lost (but thats salmon fishing), until one finally decided to take the fly properly and put up a super fight on the flyrod.

My next clients travelled over from Switzerland to chase this magical fish in the Boyne. Initially the weather conditions were not great, very bright and sunny but the guys kept casting as you never know when a take will come… The second day of their trip the weather conditions were perfect, big thick grey clouds with a few good showers….then the magic happened and we were hooked into a beautiful salmon. It put up a crazy fight running between the weeds and rocks but at the end we managed to bring her to the net. My client was mesmerised at the size of the fish he had caught and the fight that his first salmon gave and after a few quick photos with shaking legs he let the fish swim away. The Boyne had made his Irish dream come true this day.

That week was not the only “first salmon” of the week as I also helped a female angler to catch her first salmon as well. This fish was a coloured one, allready a few weeks in the river, but was a very strong fish of a good size and powerfull fight, providing another great memory with screeming reels.

Another afternoon I was also out fishing myself and caught a mixture of coloured and freshly run salmon too. 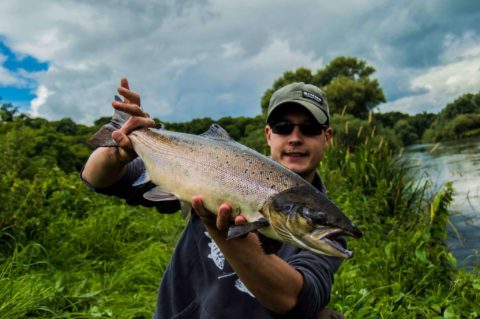 Nice to see that the water in perfect level and plenty of salmon in the pools in the Boyne for this season.