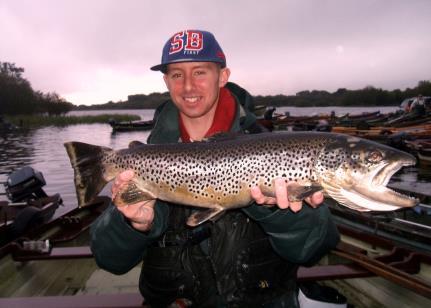 ‘Luck is what happens when preparation meets opportunity’

As this year’s trout season falls on its back and with just a few days left before the close of play on October 12th, Lough Sheelin has consistently retained its reputation as being a fickle, unpredictable and an amazing stretch of water to fish. A beautiful aquatic enigma which constantly throws up conflicting reports among the angling fraternity who fish its water.

Work circumstances have disembodied me from this lake for much of this year so for the first time I feel unprepared for the close but to quote Geoffrey Chaucer ‘time and tide wait for no man’ (or woman!) the seasonal clock is turning and in evidence through falling leaves, morning mists, shortening days and a shoreline of mixed autumnal colours.

Poor weather conditions predominated this week with undesirable north easterly winds, heavy rains and a fleeting Lorenzo all of which seem to have brought the end of the fishing season abruptly in sight. The earlier part of this week was the most productive with trout coming to teams of wet flies – hopper patterns, green peters, stimulators and dabblers.  Fishing was best in the afternoon and into early evening.

Persistent heavy rainfall increased water levels and lowered temperatures  and on most days there was little surface evidence of fish being present, just the dark churned up waters spreading uninvitingly in front of the anglers but the piscatorial fantasies were there and when an artificial came into their line of vision it was usually met with a positive take.  The fresh water and resulting high levels seemed to put the fish off initially although anglers reported plenty of followers and plucks, exciting stuff but yielding sparse returns.  There are large numbers of smaller ½ to 1lb trout present in the lake particularly around Church Island and although somewhat more foolhardy and less wary than their senior counterparts they still could be tricky to catch. The smaller trout tend to follow the fly and grab in contrast to the see saw takes of the bigger fish which swung from gentle to territorially aggressive.  The secret to landing the bigger fish was to let the fish take before the lift and to use a sink tip.

The weekend turned everything on its head here with two large competitions being hosted on this lake – the LSTPA rehabilitation and the Garda Cavan/Monaghan competitions attracting an increase of over 350 anglers on to Lough Sheelin’s waters. Lough Sheelin did not disappoint on either competition dates and some beautiful trout in excellent condition were caught with many more misses and follows. A large number of catches (many released) were recorded which hiked up and knocked askew the normal weekly angling records.

The LSTPA held their annual stream rehabilitation competition on Saturday October 5th and despite heavy rain this proved to be a very good fishing day. Attracting a record 230 anglers from all over Ireland and the UK this is the biggest one day fishing event in the country.  The bar was set high at over 16” and 52 fish were weighed in with the top 15 tipping the scales at 4lbs and over.  The winning fish was caught by Moate angler, Dylan Ennis with a beautiful 7lbs 8oz trout with Peter Crilly taking second with a 6lb 8oz weight.  Plenty of competitors had trout around the 2lbs mark but most were released as their captors quite rightly figured that these weights would not feature in the final round up.  Talking to anglers after this competition, a safe estimate would be that around 250 fish had been caught over 16 inches with 200 safely returned to the lake.

The annual Cavan/Monaghan Garda Divisional Fly Fishing Championship and Open competition was held on the lake on Sunday October 6th.  This popular event attracted 98 anglers with some beautiful trout being recorded.  Results were as follows:

Late September and those last few days in October are all about wet fly fishing and there isn’t much room for the dry fly brigade. The old mantra of keeping it simple and keeping it traditional is the best and only way to go. The hopper patterns are working with a steady consistency and had a tendency to lure Sheelin’s hefty trout to the top.  These insects are as old as 250 million years and have been around as long as our brown trout and even the pickiest of trout find it hard to resist the large meal of a realistic hopper presentation.  Terrestrial insects and in particular the hoppers and Daddies don’t just chill out when they land on the water, they hate being there and will try to tumble and scramble to get away so with this in mind a light twitch of the imitation can trigger a strike from fish that might otherwise not hit.  Black Hoppers with silver, Claret Hoppers and Silver Daddies are all working well now.

Trying hard not to think of the bingo nickname, Legs Eleven is doing particularly well.  This is a brilliant little hopper patter which has been around for a good number of years and it’s safe to say is one of the most popular Hopper patterns – a Mick Kelly version is priceless.  Legs Eleven as a top dropper brought good results for Dublin angler John McHugh landing him a 5 lb beauty.

A good step up in a Silver Daddy on the point, a Claret Bling in the middle and a Stimulator as the top dropper. The Stimulator should be not too neat a tying, you want scruffy and that ‘used before’ look as the idea is to create a good wake to attract a cruising trout’s attention.

The Lures that attracted big trout were the Snakes (black body with a muddler grey head), Minkies and Humungus in black and silver.

Due to the inclement weather there were few opportunities for buzzer fishing.

There were a few trout caught on small dry flies when olives were hatching on the surface in sheltered bays and inlets.

With only a few days to go before we bid farewell to another season here there is still plenty of sport to be had on this lake but it is good to remember that the trout are already on their spawning journey, darkening in colour and gathering for their river run, some as early as within the next few weeks so a gentle release policy is highly recommended.

Now at the very back end of this season and particularly with the recent number of angling competitions I couldn’t help but think of this magical stretch of water when I read somewhere that ‘a diamond is a chunk of coal that did well under pressure’ well, Lough Sheelin is Ireland’s angling diamond that has shone consistently regardless of all the pressure it has been under – environmental and angling.

Lorenzo was a difficult storm for the weather forecasters to predict, nonetheless it was given an orange status warning (which kept the anglers off the lake) and which prompted Dubliner Eugene Tannam to comment ‘I hear storm Lorenzo has passed. I did not know an orange warning meant that the storm would be the size of an orange’.

Des Elliott, Dublin – 1 trout at 3lbs on a Bibio, fishing at Wilson’s point.

Dara Murtagh, Cavan – 1 trout at 3lbs 1oz on a Silver Daddy fishing out from Church Island.

Kristaps Ozolins, Dublin – 2 trout at 4 ½ and 6lbs using Minkies, fishing at the back of Church Island.

David O’Feele, Wexford – 2 trout at 3 and 3 ½ lbs using a Claret Bumble and Hoppers.