While we all spent most of the past two months confined to within a short distance of our homes, at least we had some fine weather to keep our spirits up and see us through the tough times. Now that we have been given a bit of freedom to travel and maybe get out fishing again the weather has taken a turn for the worse with the past week bringing below average temperatures that had some of us switching the central heating on again! In the past few days the cold has been accompanied by some heavy downpours which will hopefully bring some much needed fresh water into many of our river systems.

Charter boat fishing was first out of the blocks with the relaxing of the travel restrictions and it’s great to have our first porbegle report for the year sent into us. Ian O’Shea and fishing mate Aaron managed to land a porbeagle after three failed attempts last Monday and that makes it the first shark capture of the year reported to us.

It was also great to hear of the seasonal return of blue shark to Irish waters this week. These much travelled species spend their lives wandering the open oceans and usually arrive off the Irish coast in late May as the water temperature warms up. They will spend the summer months patrolling the Irish coast before migrating south again in the autumn. Cork based charter skipper Dave Edwards managed to land the first blue shark of the season for angler Conor O’Reilly who he had brought out fishing in return for Conor doing some work on his boat. The shark tipped the scales at 94lbs and so that should have covered most of the debt… Dave also landed a porbeagle shark during the week making it a fine start to the sharking season. Not to be outdone on the sharking, Sean Maguire also managed to get in on the porbeagle action off the Clare coast as he combined some sharking with mixed species fishing to send his Polish clients home with smiles on their faces after a good day out.

Small boats also saw some action in Cork Harbour as there was some good fishing for bass, cod and pollock with local angling guide Richie Ryan even managing to land a cod on the fly.

Tench fishing comes into it’s own in May and early June and it is most often associated with calm summer mornings and evenings expectantly watching a waggler slowly dip, wobble and slide away from you. But anglers have to deal with the conditions dealt to them and Andy Burnett didn’t let the cool breezy conditions he faced on an early morning session in Roscommon faze him at all. Ditching the waggler for a feeder, he proceeded to cooly and breezily land tench after tench after tench as he made his way to a haul of approx 120lb of tench averaging 5lb with at least five of those topping the magical 6lb specimen size. I’m sure Andy has a sore arm after filling a bag like that and he wins this weeks Catch of the Week for his magnificent haul.

The low water levels have hampered salmon fishing around the country and salmon anglers will be hoping that the recent rain will freshen up the parched rivers and encourage the salmon to move up through the systems. There have been a few fish caught on Carrowmore but Currane anglers suffered under the low water conditions as no fish were caught for the week.

For all the hopeful salmon anglers out there IFI have made salmon licences available from their online shop. The licences will be sent directly to your phone/computer where they can be printed off. Tags wil follow in the post and anglers can fish C&R  while waiting for the tags to arrive. 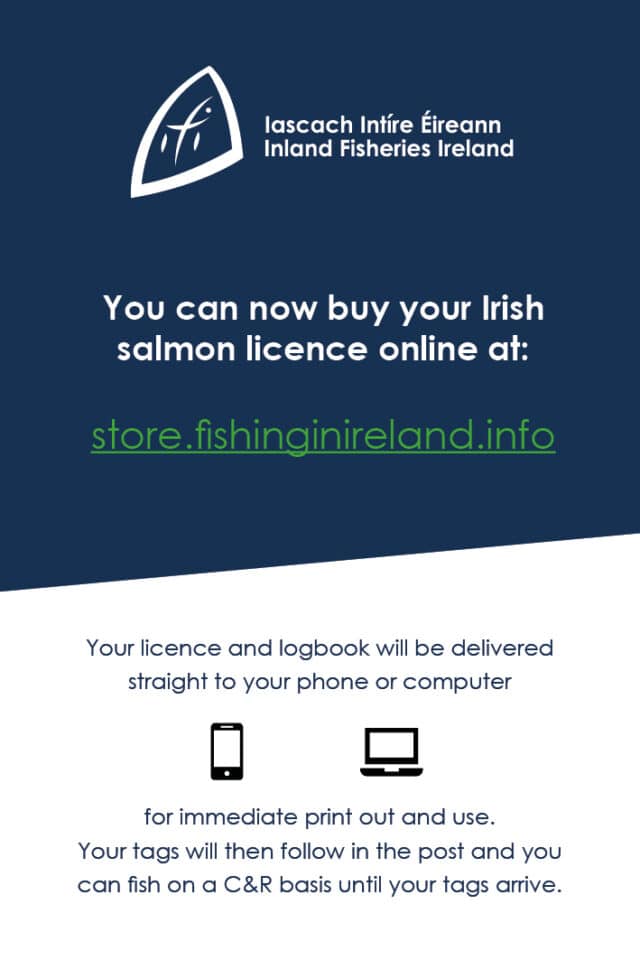 The mayfly hatch is petering out on most of our loughs now and the recent cool weather did nothing for anglers hoping for any late spent gnat fishing. The gnat tend to prefer warm evenings with gentle breezes and these were in short supply in the past week leaving many anglers hopelessly peering into the tree tops longing to see some gnats in their mating dance. They were to be disappointed for the most part but some Sheelin anglers managed to stick out the cold evenings and were rewarded with the odd fish for their troubles and, as is the norm for Sheelin, there were some big fish amongst them.

We are all still operating under the Covid-19 restrictions which is limiting our movements around the country. We urge anglers to adhere to all government guidelines relating to Covid-19 in the hope that we can continue our path towards recovery. IFI is continuing to review the government advice as it comes out and publishing a roadmap for return to the water which gives guidelines on what anglers can expect at each stage of our recovery.

Many charter boat skippers, angling guides and guesthouses will have gaps in their schedules over the coming months due to cancellations from foreign tourists so this year could be a good year to get out there and take advantage of their angling knowledge and sample some of the best fishing Ireland has to offer. IFI have a list of charter boats and angling guides on their website and, as restrictions relax over the coming weeks, now would be a good time to make an enquiry.

A reminder to sea anglers – as part of the Irish Marine Recreational Angling Survey, IFI in consultation with stakeholders have developed a behaviour and attitude questionnaire to inform about the state of sea angling in Ireland. If you consider yourself a sea angler, regardless of your level of ability or enthusiasm, we would love to hear from you.

And now the weather….

Grilse and good salmon reported from the Bandon

Steady fishing for salmon anglers on the Lee