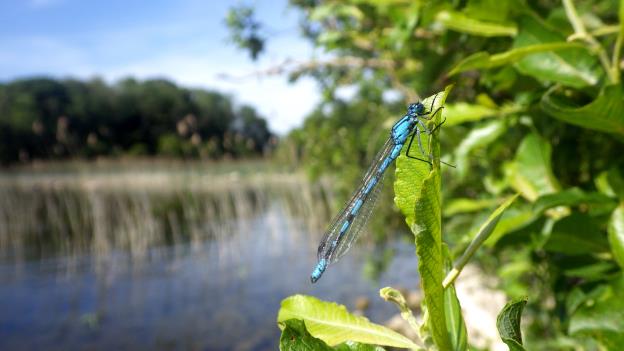 Now, into the first week of September, the cool breezes of autumn along with some heavy rainfall, freshened up the water and livened up our trout. Seasonal change is in the wind and while day time temperatures peaked at 20°C in the bright sunshine, an all too familiar autumnal chill edged each day reminding us that we are gradually moving into the back end of the season – ‘the Fall’.

The fishing has been very locked into the weather patterns. The dying remnants of America’s hurricane Laura resulted in heavy and interminable rainfall mid-week which raised water levels substantially. Southerly winds predominated throughout the week with north to north westerly’s moving in at the weekend. There was a noticeable increase in anglers and on most days boat numbers hit the double figures.

Most fly fishing for autumn trout requires patterns on opposite ends of the size spectrum – both tiny dry flies (for the sedge feeders) and large lures can work at different times of the day.

There is still room for the dry fly angler here but conditions have to be nigh on perfect – warm and calm and when this happened, mostly after 6pm pockets of trout would come up to feed on small sedges and a size 16 brown sedge sometimes did the trick.

It’s very hit and miss for the dry fly angler now and really at the back end of the trout season the successes are very much down to teams of wets and the use of lures. The Stimulator featured strongly in the catches for this week with the claret being the most popular although some anglers preferred the orange variety. The original pattern is from the American fly tyer Randall Kaufmann who tied it to imitate the adult stonefly but it will fish just as well as a hopper or caddis fly. This well dressed pattern is for fishing rough water, where it can be easily seen at a distance and it floats like a cork.

Stimulators are versatile and although look difficult, are relatively easy to tie, again, it’s all about proportions. By varying the size and colour, you can imitate most adult stoneflies. The Stimulator can also be tied with rubber legs; it is a great attractor pattern that will bring fish up to the top, when most other patterns fail. This tying is best streaked over the water’s surface, especially on windy areas. In general they float well in rough water but on calmer drifts it might fish better if the hackle on the underside is trimmed so that it floats a little lower in the water and strip it hard with short pauses through the surface over possible fish lies – just a suggestion. Vincent Kelly caught a nice 2 lbs trout using a Mick Kelly stimulator drifting into Gaffney’s Bay on Thursday.

Along with fishing wets, now is very much the time when some land borne insects could tumble on to the water and in the process offer a ‘hard to resist’ meal to our scaled friends. The odd Daddy Long Legs was seen, along with ants and beetles. Daddy patterns as well as small black Klinkhammers and Black Pennell’s worked for some anglers and are a good addition to the fly box at this time of the year. Trout are still chasing fry so floating fry patterns and lures like Minkies had some degree of success.

Going through the week:

Monday was officially the last day of summer and it came with chilly fresh southerly winds. Southerly winds reputedly favour the wet fly fisherman but fishing was still tough going, with returns averaging around the 1½ – 2 lbs caught on Claret Stimulators, Claret Bumbles and Hopper patterns. Anglers reported few sightings of fish and it was disappointingly slow. Tuesday again saw more southerly winds progressing from light to moderate, there was a small window of opportunity for dry fly sedge fishing in the more sheltered areas and a few trout up to 3 lbs were caught on size 16 sedge patterns.  Wednesday was very wet and humid as the tail end of hurricane Laura struck, only a few anglers ventured out and these were all wet fly fishermen using Stimulators, Bumbles and lures. Temperatures dropped for Thursday and Friday producing fresher conditions with westerly winds which opened up other areas of the lake for fishing. Returns were poor and wet fly methods predominated. Angling numbers picked up considerably at the weekend with the use of lures featuring heavily – minkies and humungus.  Some larger trout were caught, heaviest at 5 lbs landed by polish angler Franciszok Zielinski but in general the catches were few and ‘hard got’.

19 trout were recorded for the week.  The majority of the catches were in the early morning and late afternoon.

The weight of the week was Franciszok Zielinski’s 5 pounder caught on a Minkie at the back of Church Island.

The most popular flies were the Red Tailed Peters, Golden Olives Bumbles, Pearly Invictas, the Dabblers (Silver, Sooty and Peter Ross), the Grey Flags, the Stimulators (Grey, Claret and Bling), the Black Pennells and the Black & Peacock Spiders. Some lures were used on sinking lines – di3 and 5.

The Green George, Claret George and Detached Daddy were good, these are great teaser flies and were excellent as top droppers. The Muddlers worked well on the lake, these flies push through the water creating a bubble which attracts the feeding trout. Other ‘pusher flies’ used to create a disturbance and used again on the top dropper were the Bibios, Zulus and Sedgehogs. Something sleeker and more imitative on the middle like the Claret & Mallard, Silver Invicta and Wickham’s Fancy and then a flashy attractor on the point like a Dunkeld, Peter Ross or Alexandra. The Bibio is a very versatile fly as it can work both as a top dropper attractor and a tweaked dry, when greased. Gaudy patterns were good for those targeting the Daphnia feeders out in the open water. Lures that were successful were Black & Silver Minkies and a black Humungus.

The best areas for fishing on the lake this week were Lynch’s pt. Chambers Bay, mid lake, at the back of Church Island, Bog Bay, Goreport, Corru and Merry Pt.

Autumn can produce some magical days on Lough Sheelin but to be honest, the action isn’t always that good as large trout are finicky and easily spooked at the best of times but still the opportunity to encounter big, brilliantly coloured wild trout increases during the autumn as those large fish who have been sulking down in the lower regions are starting to move into the shallower, more accessible lies, driven by the spawning urge and the need to bulk up before the long winter.

Despite the constant unpredictability of the weather and the fickleness of Lough Sheelin now is a good time to get out on this lake as there is plenty on offer and of course ‘it is better to have hooked and lost than never to have hooked at all’.